Video games are a pandemic-proof industry that generated $155 billion in revenue in 2020 and is on track to generate $200 billion in revenue globally by the end of 2023. One underlying element powering much of this success is the proliferation of reliable, accessible, and full-featured gaming engines.

Game engines provide the underlying technologies that make a game function, such as graphics, rendering, scripting, and AI behaviors. While some studios choose to build their own engines from scratch, this comes at a sizable cost, tacking on months of development time, not to mention the cost of hiring engineers and getting them up to speed. Even then, there’s no guarantee that the results will perform better (or even as well as) development platforms currently on the market.

Also consider that the days of “ship it and forget it” development are long gone from the games industry. Today game creation is just one piece of a much larger puzzle, and these pieces include ready-made solutions such as live ops, monetization, and analytics. Lucky for developers, it’s not uncommon to find off-the-shelf solutions to help with these too, as well as practically every other aspect of game development and operation.

Growing from their roots as a game engine, companies like Unity now offer a platform for game developers, a one-stop shop that gathers all of the tools needed for creation, operation, and monetization under one roof. Offering tools that are designed to be interconnected from day one ensures a “plug-and-play” level of reliability.

Studios of all sizes are seeing the benefits of choosing an established ecosystem like Unity for their development, and the numbers speak for themselves: Twenty-three of the top 50 games on Steam; almost 50 percent of the best-selling indie games on Switch; and more than 70 percent of the 100 top-grossing mobile titles are made with Unity. Currently 61 percent of all developers use Unity to create and operate their games, and its ease of use has helped democratize the gaming industry.

Unity is free to download, and for starting out and learning, the barrier to entry is low. When you get serious about getting your game to market, Unity helps indie developers and large game studios alike realize their vision on time and on budget. 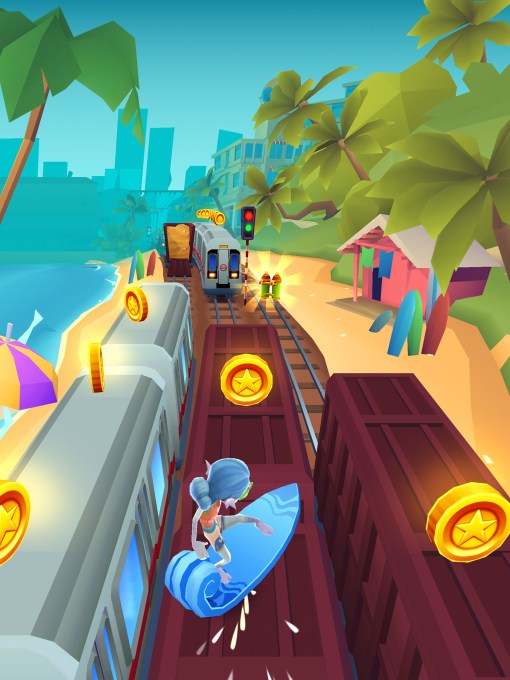 In the past, games were developed for a single platform, and porting to a different OS was a complex technical challenge that very few studios were able to accomplish. Technical director of mobile developer SYBO Games’ Murari Vasudevan says, “We would have to recompile all the code into another language, and sometimes it wouldn’t even compile, which is something you take for granted these days.”

Today, however, even the smallest of indies can target multiple gaming platforms because of the solutions provided by Unity. At the time of this writing, Unity’s development environment supports more than 20 different platforms, including mobile devices, and requires minimal effort from creators to move their projects between them.

SYBO’s smash hit endless runner Subway Surfers has surpassed 3 billion lifetime downloads, thanks in part to its availability on a wide variety of devices.  “[Unity is] really handy for cross platform development,” Vasudevan says, “which in mobile is really useful. We don’t need to make our games specifically for iPhone, for Android, or for web. Now you can ​​just build your project and deploy to any platform.”

The Nintendo Switch, the hybrid portable/home game console, is one of the most popular gaming devices on the market. Currently, more than half of the games on the Nintendo Switch are based on the Unity engine with many developers targeting this platform early in development. That’s because Unity recognizes the challenges of this particular port and provides help even before developers have written a line of code.

Unity also makes it simple to reuse assets from your existing games. For example, while making the handheld game Assassin’s Creed Identity Ubisoft Blue Byte were able to adapt the animation files from Assassin’s Creed. The Total War series, as well as physics puzzler The Bridge, were able to easily shift their assets between consoles and handheld.

A stitch in time

By building an ecosystem that can meet the widest variety of developer needs, engine providers like Unity are able to offer ancillary products and services that can greatly accelerate development time. The Unity Asset Store, for example, is populated with thousands of tools, graphics, models, textures, and sound effects. Studios and developers can use these available assets from creators across the globe as-is  or modify and adapt them to fit the look and feel of their game.

With the help of assets from the Asset Store, CEO of Game Insight Anatoly Ropotov says he had a prototype of their first-person shooter Guns of Boom in hand within one month. All told, Unity saved Game Insight six months of development on Guns of Boom. When the game was released, it was downloaded 5 million times in its first two weeks.

Olov Redmalm, creative director of Zoink’s action-adventure Lost in Random, shares another way in which Unity saves time: “The team can split up these different scenes of the same level and work parallel to each other. You can have a designer working on one area of the map and an artist will take another part of the map.” The team also benefited from an engine that delivered on their unique stop-motion-inspired aesthetic.

Developing in an always-live environment

Thanks to the evolution of connected devices and the desire for regular, recurring content, even seemingly offline single player experiences are “always on” and see ongoing live support. And as you can imagine, for the developers behind today’s massive multiplayer experiences, complete with season passes, matchmaking, content drops, and more, live operations dominate every waking moment (and probably cause a few sleepless nights, too).

“Game development” isn’t just about developing new content, either. Sometimes it refers to keeping the game running. A crash reporting system lets developers gather data from players in the field to help narrow down problems and level up patch time. (And as game developers know, crashes are bad, but debugging is the grinding of the development world.) 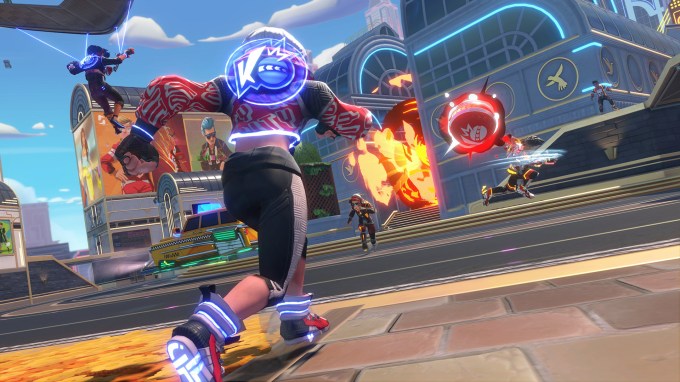 COO of Velan Studios, makers of multiplayer dodgeball game Knockout City, David Nathanielsz says Backtrace, Unity’s crash-reporting system, has helped his team identify errors, and with its reports, produce meaningful data. “It’s a great tool to be able to verify whether people are accurately reporting how and why their games are crashing,” says Nathanielsz.

Developers in real need can find something like a gamer’s extra life with Unity’s premium technical support plan, Integrated Success. This top-tier support plan connects developers to a Developer Relations Manager (DRM) who will help them mitigate risks and remove development roadblocks. In addition to guaranteed response times and prioritized bug-handling, Integrated Success subscribers also receive an annual Project Review, performed by a Unity engineer who will deep-dive into their projects and come back with any recommendations for optimization.

Vasudevan says that after discussing a particular issue, “Unity sometimes provides us with fixes, or they tell us this fix will happen in the next release. ISS has helped us immensely.”

With an entire world of complicated mechanics and plentiful power-ups, the team behind Knockout City decided to develop its own game engine in-house. But when it came to the moving pieces outside actual gameplay, developers at Velan Studios turned to Unity.

Velan chose Unity’s Multiplay to help with the matchmaking system for its competitive multiplayer gameplay. COO of Velan David Nathanielsz says that Multiplay was vital to creating a backend system “without having to build it all ourselves, [and] finding technologies that can help us get there as quickly as possible was really important for us.” This free-to-play game was released simultaneously on Microsoft Windows, Nintendo Switch, PlayStation 4, and Xbox One, and Nathanielsz credits Multiplay for its capable handling of 5 million users in the first two weeks of the game’s release.

Then there’s Vivox, Unity’s off-the-shelf live chat system, which lets players communicate by both voice, text, voice-to-text, and text-to-voice across all major platforms. Typically, a full-featured voice chat system would take four or more developers over several months to create and implement. However, Nathanielsz says Velan plugged Vivox into its engine and got it up and running in no time, requiring only one member of their team to manage the deployment.

Game companies who use Vivox are always getting the best chat system product possible, as the Vivox team continues to iterate and improve the system; companies who build out their own chat system must constantly iterate and maintain it, taking developers away from their world-building work.

The right solution at the right time 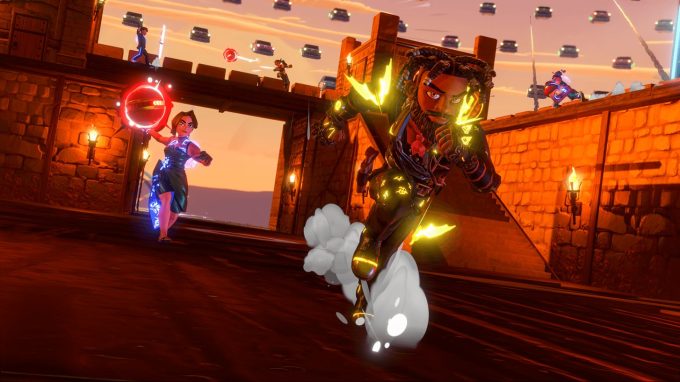 Vasudevan also notes that Unity also provides a portal for developers to fund their projects and grow their games with Unity Ads, a robust network that has a global reach of 2 billion users per month and serves 22.9 billion ads per month.  Along with In-App Purchasing (IAP), developers can monetize quickly and simply. “Before there was Unity IAP you had to write your own library of in-app purchase handling. That code flow is now handled by Unity, and it puts the power of free-to-play in the hands of every developer out there.”

Unity isn’t just a game engine. As Vasudevan says, “It’s more of an ecosystem of services and tools.”

As developers know, gamers are among the most demanding consumers, and their expectations continue to grow. Studios will be meeting the challenges of constant innovation with high-fidelity games that produce more connected experiences. Although these games are more complex to create, Unity will be there to support them with its portfolio of solutions. Developers can then focus on bringing their vision to life for gamers to enjoy. This way, everybody wins.