Fair, a multilingual digital bank and financial services platform, is launching to the public after raising $20 million in 40 days earlier this year.

Founder Khalid Parekh raised the capital primarily from the very demographic that Houston-based Fair aims to serve: from a group consisting of a number of immigrants, many of whom were first-time investors.

“There was not a single check from a VC or bank or from a family office,” Parekh told TechCrunch. “Ninety percent of our investors are minorities or are immigrants like myself that believed in the concept of Fair.”

One could say that it’s also fitting that Fair’s headquarters are in Houston, which at the time of the last census was the most ethnically diverse city in the United States.

Parekh is not your traditional fintech founder. He doesn’t have banking or financial services experience, although he does have experience founding and running a successful company: AMSYS Group, which is valued at nearly $350 million. His mission with Fair is largely personal. Upon arriving in the U.S. from India with just $100 in his pocket 22 years ago, he struggled to not only get a loan but also to open a bank account. 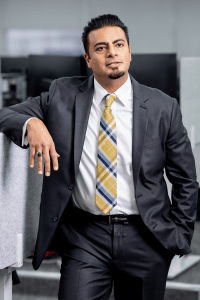 “I was an engineer by background, but was very confused with the American banking system. There is not a lot of help for immigrants who don’t understand it well,” Parekh recalls. “My biggest challenge was sending money back home. There was just a lack of welcome.”

In 2020, he used his own cash to build out the technology behind Fair, which is designed to be an option to those who are new to the country, have no credit or need access to interest-free loans. Fair operates with Coastal Community Bank as its sponsor bank. Parekh’s goal with Fair is to provide “ethical, transparent banking” – to anyone – via a membership model that eliminates all banking fees. Members can pay a one-time membership fee of $99 (paid in full or in installments) to have access to all of Fair’s online banking and financial services.

“Another challenge that I saw is that there were hardly any options for insurance and retirement services for immigrants and low-income people,” Parekh said. “All big institutions catered to people with a lot of money. But we want to create an institution where we are fair to everybody, regardless of religion, race, color, net worth or how much is in their bank account. We want everyone to be treated the same.”

Over the past year, the nation has seen a surge of neobanks emerge aimed at specific demographics, including Greenwood, First Boulevard and Cheese. Welcome Technologies is also aimed at serving the immigrant population.

Fair aims to differentiate itself, according to Parekh, by offering interest-free lending, as well as the ability to invest, get insurance and plan for retirement in one platform that is available in English, Arabic and Spanish (with more languages to come). Ultimately, his goal in Fair is to help address the “longstanding racial income inequalities and widening wealth disparities in the U.S.” He won’t get a salary for his role as CEO.

Among Fair’s features are free international transfer, early access to paycheck funds, “instant, interest-free” microloans — essentially buy now, pay later at the register — an annual dividend account, debit card accounts for kids and interest-free loans for home, auto and business that are equity-based. Those equity-based loans are Sharia compliant, meaning that it’s not kosher to take interest. They also comply with Jewish law.

Instead, if a member wants to buy a home, they can put 20% down, and Fair will provide 80% via an LLC, of which the member and bank will be co-owners.

“The members will have the option of buying out our shares on whatever schedule they wish,” Parekh said.

In partnership with Avibra, Fair is offering free supplemental life, accident medical and AD&D insurance to all members as part of its banking services.

Fair aims to practice socially responsible investing (SRI), an approach to investing that reduces exposure to companies that are deemed to have a negative social impact. The fintech also practices ESG investing, which measures the sustainability of an investment and its overall impact in three specific categories: environmental, social and corporate governance. And, it’s also working with the United Nations High Commissioner for Refugees and World Relief, and will donate 2.5% of profits to refugee missions globally, as well as racial economic empowerment initiatives.