Welcome Tech, which has built a digital platform aimed at immigrants and their families, has raised $35 million in a Series B funding round co-led by TTV Capital, Owl Ventures and SoftBank Group Corp.’s SB Opportunity Fund.

Crosscut Ventures, Mubadala Capital, Next Play Capital and Owl Capital also participated in the financing, which brings the Los Angeles-based company’s total raised to $50 million since its 2010 inception. Welcome Tech, which has an office in San Antonio, Texas, raised an $8 million Series A in March of 2020.

Built by immigrants for immigrants, Welcome Tech aims to do just what its name indicates — help immigrants feel more welcome, have an easier transition and achieve greater success when moving to the United States.

The company’s approach was different in that rather than launch a banking product and then set out to earn the trust of the community it aims to serve, it first worked hard to earn that trust and understand the community’s needs.

So in its first years of existence, Welcome Tech has focused on building out a platform that provides educational resources, information and services that “they need to thrive in a  new country.” Its efforts are initially primarily focused on the Hispanic community in the U.S.

The goal of its platform, dubbed SABEResPODER (meaning Knowledge is Power in Spanish), is to serve as “a widely recognized and trusted resource” to members of the Hispanic community in the U.S., the company says.

Armed with knowledge and data that it has gathered over the years, Welcome Tech six months ago launched a banking service, including a debit card and bilingual mobile app. And in January, it launched a monthly subscription offering that gives users access to discounted resources such as medical and dental professionals.

Gardiner Garrard, co-founder and partner, TTV Capital, points out that the Hispanic market represents the largest minority cohort in the U.S., with a population of 62.8 million.

“That said, less than half of Hispanic households are ‘fully banked’, meaning they cannot open an account, which then negatively impacts their ability to secure other products or services,” Garrard said. “To not serve this community is a major failure. Welcome Tech is addressing this issue head on.”

Today, Welcome’s platform is approaching 3 million active users, according to co-founder and CEO Amir Hemmat. Its ultimate goal, he said, is to serve as “digital Ellis Island.”

“The way we leave immigrants’ success to chance is pretty crazy,” he told TechCrunch. “If you think of countries the way you think of companies and the way they want to attract and retain…here, we almost do the opposite.” 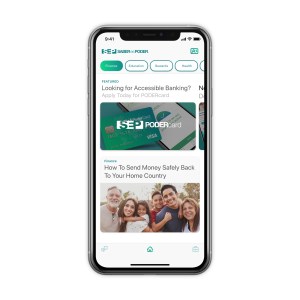 In particular, Hemmat and co-founder Raul Lomeli-Azoubel recognized that access to financial services was crucial to immigrants’ success.

“Although we ultimately see ourselves building towards a better future for immigration and a broader platform, the foundation and beachhead for that is definitely in financial services,” Hemmat said.

Welcome offers a free banking account that is fully bilingual for English and Spanish speaking communities with “key features that are very tailor made for this community.”

A number of new digital banks targeting Latino and immigrant communities in general have emerged in recent years, including TomoCredit and Greenwood. Welcome aims to differentiate itself from competitors in being a more broad-based platform. Its subscription offering — at $10 a month — does things like offer discounts to healthcare professionals and free televisits, for example.

“When we dug in, we realized that immigrants are not being provided data-driven recommendations,” Hemmat said. “It’s very much a word of mouth and trial of error, and in some cases highly predatory, experience. We’re working to aggregate a historically fragmented audience and that gives us massive leverage to source better offerings, pricing and experiences for consumers across multiple categories.”

The company plans to use its new capital to build more partnerships so that it can do the above, as well as spread awareness about its services.

Gosia Karas, investment director and head of growth stage investments at SoftBank’s Opportunity Fund, told TechCrunch that the fact that the immigrant population in the U.S. is “growing really fast and underserved creates an opportunity for someone to come in and serve them well with a financial services offering.”

In particular, SoftBank was attracted to Welcome Tech’s approach to truly understand, and gather data around, its target market.

“Before even jumping head first into building a fintech company, they did a lot of work prior,” Karas said. “They spent years building an understanding of this audience of the immigrant population, including building trust within that demographic. And at the same time, they have been building targeted content. This serves as a really great backbone to build a company that is very well-suited to serve that audience and to roll out things like the debit card and other financial services offerings.”

Are subscription services the future of fintech?