Many things have accelerated in the world of fintech over the past year, not the least of which is the trend of digital banks aimed at specific communities in the U.S.

In the past few months alone, a number of neobanks targeting the Black and Latinx communities have emerged. Most recently, we covered the $5 million raise of one such bank — First Boulevard.

Today, Cheese announced the launch of its digital banking platform that is aimed at primarily serving the Asian-American community. Co-founder and CEO Ken Lian came to the United States from China in 2008 to attend college. In the years after his move, Lian said he paid thousands of dollars in bank fees and got rejected “multiple times” for basic bank accounts, despite having a FICO score over 800.

Those experiences led him to come up with the concept behind Cheese, which he said will offer its banking services via a multi-language platform. The one-year-old startup also has a social component, giving customers a way to support Asian-American businesses and organizations. Lian is no stranger to the world of entrepreneurship, having also founded Moolah Science, a startup that helped consumers find out if online stores owed them a refund that got acquired by a Fortune 500 company in 2019.

Lian founded Cheese along with Zhen Wang and Qingyi Li under the premise that Asian-Americans are often subject to discrimination and “an unequal playing field” in America despite being among the most educated in the country.

“We understand Asian users much better than anybody else because we are the user,” Lian told TechCrunch. “[Traditional] banking didn’t understand me or my culture or my lifestyle or what matters to me. Our needs are different.”

“A lot of challenger banks also never focused on Asian communities and immigrants,” he added. “We want to provide a great product to welcome these people to the U.S. and make it easy for them to bank.”

Over the past year, Cheese has raised a total of $3.6 million in funding from investors such as iFly.vc; Amplify; Adam Nash, former CEO of Wealthfront; Zillow co-founder Spencer Rascoff and VC firms Wedbush Ventures, Idealab and Operate Venture Studio. The startup has also partnered with actor Jimmy Wong, an advocate for Asian rights. He will serve as Cheese’s chief community ambassador.

Cheese’s platform provides a debit Mastercard (issued by Coastal Community Bank), which is available to those with no credit history. (If this sounds familiar, it’s a similar offering as that of TomoCredit, a startup that recently raised $7 million to scale its debit card product for those with little or no credit history.)

Cheese cardholders can use the virtual cards instantly through their mobile wallets, the company said. Other features include offering advance pay up to two days early with direct deposit, a 3% deposit bonus for referring friends, 0.3% annual percentage yield (APY) and up to 10% cash back on purchases at more than10,000 merchants. 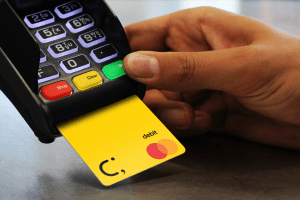 “They don’t necessarily get the same kind of service or product for their banking needs and they face all kinds of pain points,” he wrote. “Cheese has a list of products they want to develop for that type of customer…We know there is a product market fit based on our research and we know this is a strong team.”

The investment marks iFly’s first in the consumer fintech space in which it acted as a lead investor.

“We were already determined to invest on the mission side. They wanted to make things easier and better for the underbanked, including immigrants,” Shen continued. “People deserve a better service. In Cheese’s case, the question is not whether or not to provide it, the question is about how to do it right to address their pain points.”

In conjunction with its launch, Cheese has pledged $100,000 to the Cheese Giveback Fund, 100% of which will be donated to nonprofits and community service programs in support of Asian neighborhoods and businesses impacted by violence and economic hardship during the COVID-19 pandemic.