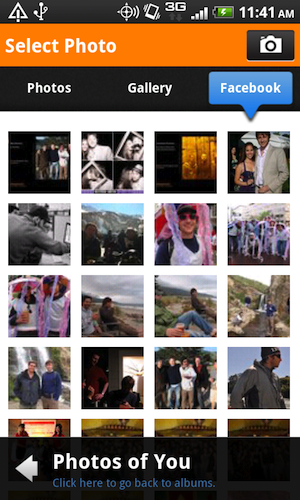 When we first covered Postagram in April, there was a lot of excitement about it. They take your Instagram photos and turn them into postcards that you can send right from your iPhone — who wouldn’t love that? Well, Android users, for one. With a new release today, Postagram has remedied that — with a twist.

Yes, Postagram for Android is now available for free in the Android Marketplace. But because Instagram itself still isn’t even available on Android, Sincerely (the team behind Postagram) decided to do things a bit differently with the Android version. With it, you can upload and create postcards from images found on your Android device or from your Facebook account. So yes, the “agram” aspect of the name doesn’t really apply here. At least not yet.

Still, as popular as Instagram has become, Facebook is much more popular. While Instagram is just about to hit 5 million users, Facebook is closing in on 700 million. And their photo service in particular is by far the most popular one on the web. In fact, it’s now larger than all the other ones combined. Content will not be a problem.

And alongside the Android release, Postagram is upgrading their iPhone app to version 2.0 as well to match the functionality. Now with the iPhone, you can upload a photo from your phone, or choose a Facebook photo, on top of the Instagram support.

Also new (and available on both the iPhone and Android versions) is the ability to send to multiple recipients. The design on the back of the actual Postagrams has also been altered to now include the (optional) message and a profile photo of the person who sent the Postagram.

While the price remains the same ($0.99), Postagram is also offering a 24 hour period in which new users can send one Postagram for free starting right now.