Mobile gaming continues to hold its own, accounting for 10% of the time users spend in apps — a percentage that has remained steady over the years, even though our time in apps overall has grown by 50% over the past two years. In addition, games are continuing to grow their share of consumer spend, notes App Annie in a new research report out this week, timed with E3.

Thanks to growth in hyper-casual and cross-platform gaming in particular, mobile games are on track to reach 60% market share in consumer spend in 2019.

The new report looks at how much time users spend gaming versus using other apps, monetization and regional highlights within the gaming market, among other things.

Despite accounting for a sizable portion of users’ time, games don’t lead the other categories, App Annie says.

Instead, social and communications apps account for half (50%) of the time users spent globally in apps in 2018, followed by video players and editors at 15%, then games at 10%.

In the U.S., users generally have eight games installed per device; globally, we play an average of two to five games per month. 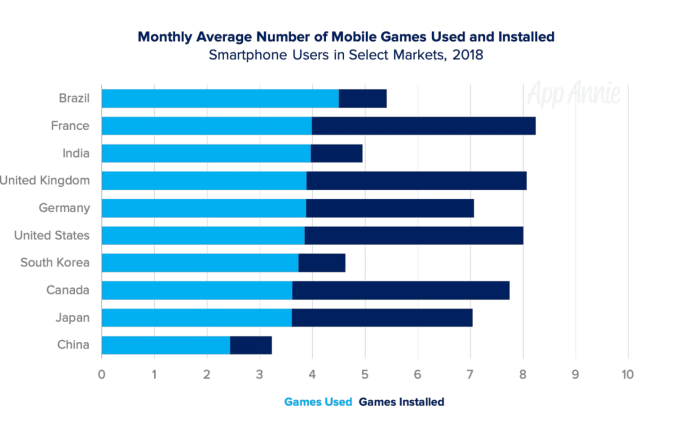 The number of total hours spent on games continues to grow roughly 10% year-over-year, as well, thanks to existing gamers increasing their time in games and from a broadening user base, including a large number of mobile app newcomers from emerging markets. 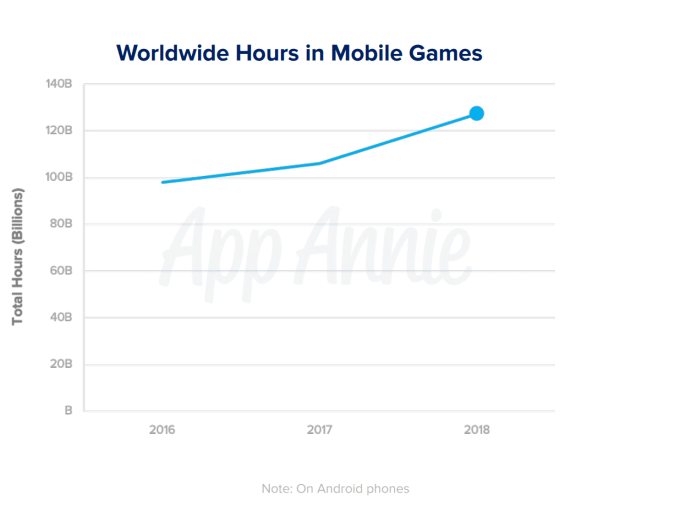 This has also contributed to a widening age range for gamers.

Today, the majority of time spent in gaming is by those aged 25 and older. In many cases, these players may not even classify themselves as “gamers,” App Annie noted. 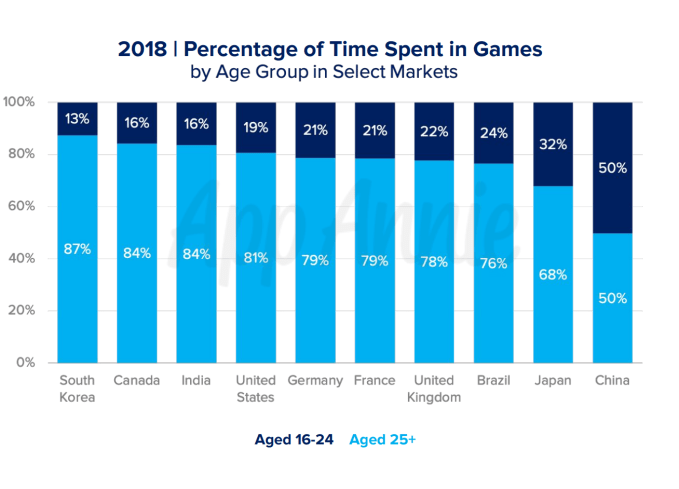 While games may not lead the categories in terms of time spent, they do account for a large number of mobile downloads and the majority of consumer spending on mobile.

One-third of all worldwide downloads are games across iOS, Google Play and third-party app stores.

On Android, 74 cents of every dollar is spent on games, with 95% of those purchases coming as in-app purchases, not paid downloads. App Annie didn’t have figures for iOS. 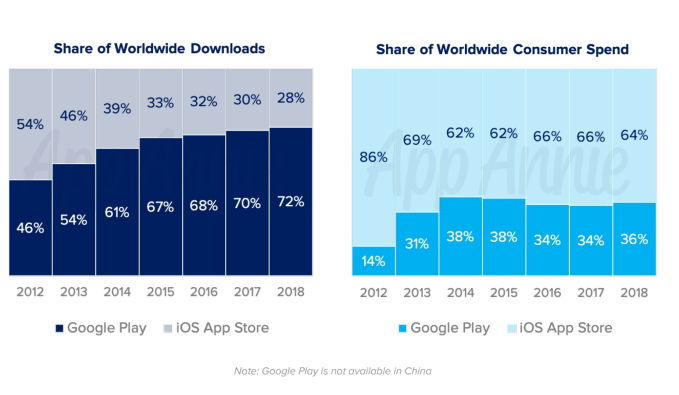 One particular type of gaming jumped out in the new report: racing games.

Consumer spend in this subcategory of gaming grew 7.9 times as fast as the overall mobile gaming market. Adventure games did well, too, growing roughly five times the rate of games in general. Music games and board games were also popular. 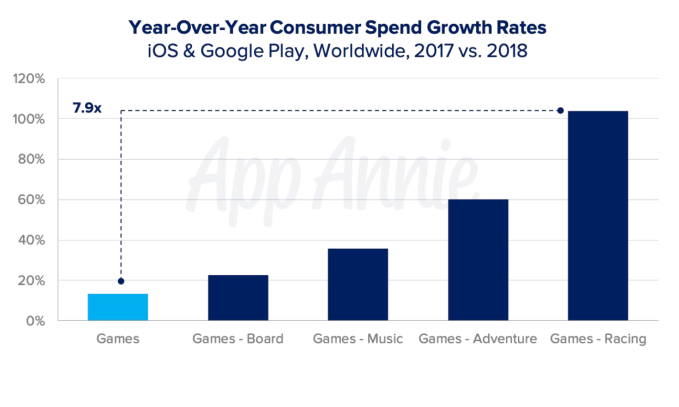 Of course, gaming expands beyond mobile. But it’s surprising to see how large a share of the broader market can be attributed to mobile gaming.

According to App Annie, mobile gaming is larger than all other channels, including home game consoles, handheld consoles and computers (Mac and PC). It’s also 20% larger than all these other categories combined — a shift from only a few years ago, attributed to the growth in the mobile consumer base, which allows mobile gaming to reach more people. 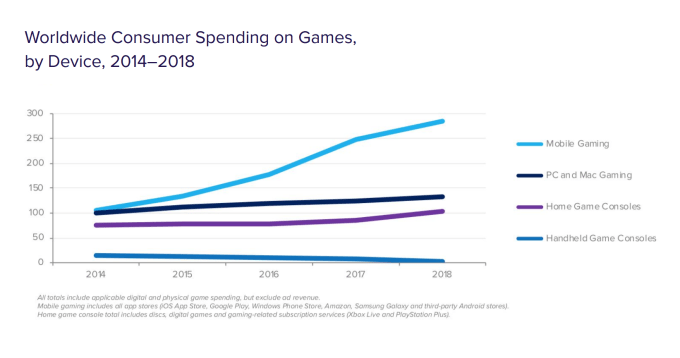 Cross-platform gaming is a key gaming trend today, thanks to titles like PUBG and Fortnite in particular, which were among the most downloaded games across several markets last year.

Meanwhile, hyper-casual games are appealing to those who don’t think of themselves as gamers, which has helped to broaden the market further. 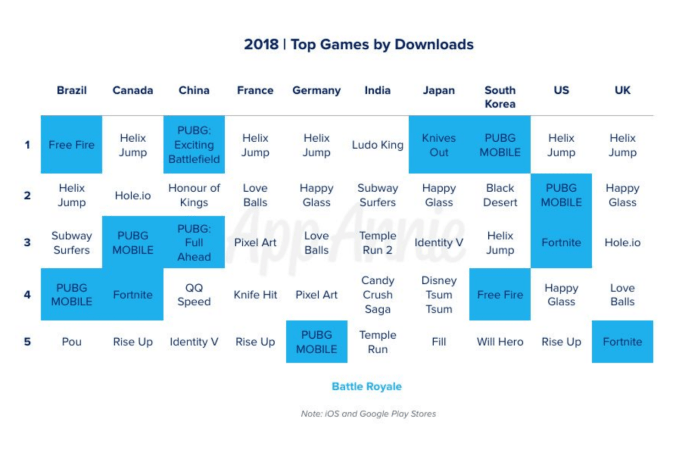 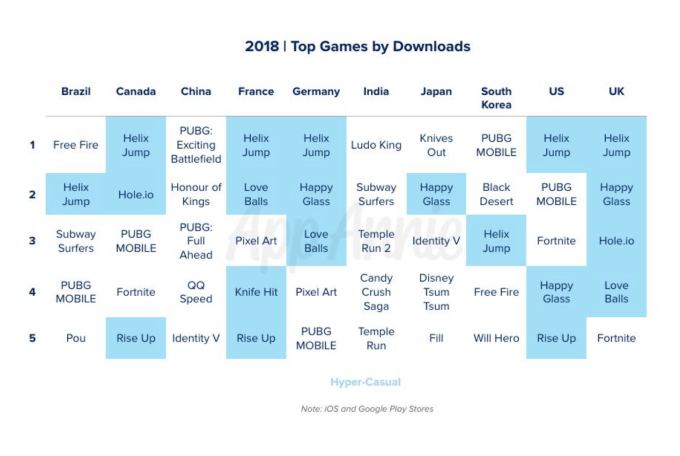 App Annie is predicting the next big surge will come from AR gaming, with Harry Potter: Wizards Unite expected to bring Pokémon Go-like frenzy back to AR, bringing the new title $100 million in its first 30 days. The game is currently in beta testing in select markets, with plans for a 2019 release.

In terms of regions, China’s impact on gaming tends to be outsized, but its growth last year was limited due to the game license regulations. This forced publishers to look outside the country for growth — particularly in markets like North America and Japan, App Annie said.

Meanwhile, India, Brazil, Russia and Indonesia lead the emerging markets with regard to game
downloads, but established markets of the U.S. and China remain strong players in terms of sheer numbers. 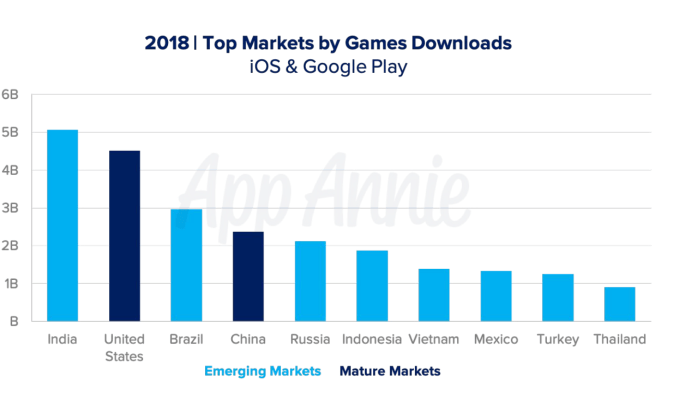 With the continued steady growth in consumer spend and the stable time spent in games, App Annie states the monetization potential for games is growing. In 2018, there were 1,900 games that made more than $5 million, up from 1,200 in 2016. In addition, consumer spend in many key markets is still growing too — like the 105% growth in two years in China, for example, and the 45% growth in the U.S. 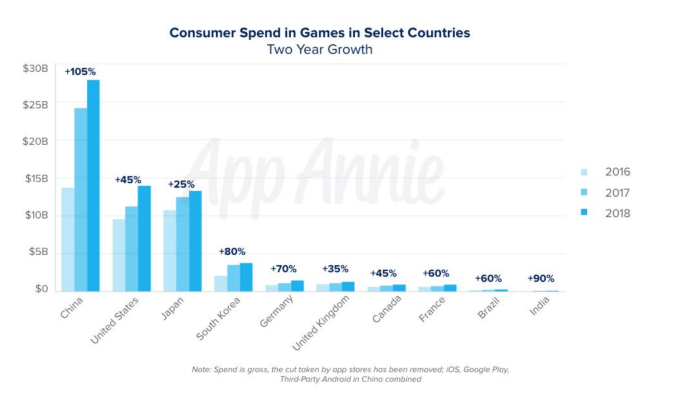 The full report delves into other regions as well as game publishers’ user acquisition strategies. It’s available for download here.