As Roborace accelerates its plans to build an autonomous racing league, the company is finding that its toughest competition are still human drivers.

In this version of the John Henry story, the humans clearly are still winning, but the robots are catching up.

“We’re going to call it a singularity event when an autonomous racing car is faster than any racing driver,” says Lucas Di Grassi, Roborace’s chief executive and one of the world’s best Formula One racecar drivers. “We started the year 20% slower and we are now 6% slower.”

For the company’s long-term vision, the cars need to be better than any human, because part of the company’s pitch is to be the proving ground for autonomous technologies and a platform to put automakers’ best innovations through their paces in extreme conditions.

“We think when the car reaches a level that is better than any human this will create a layer of trust on the roads,” says Di Grassi.

It’s a vision that has attracted the attention of some of the world’s biggest companies. Earlier this week, Amazon announced its own initiative for autonomous racing cars. And if Amazon is interested, you can be sure other large technology companies are also angling for a pole position in this proving ground for technology’s latest moonshot.

Amazon’s version of autonomous race cars are smaller than Roborace’s full-sized vehicles — and at $399 are far cheaper than the $1 million vehicles that Roborace is planning on putting on tracks.

Beyond the potential corporate competitors, the company’s human competition is more than just a technical obstacle for Roborace. It’s also a critical unknown when it comes to predicting whether anyone actually will want to watch the races.

When asked whether he thinks Roborace can find an audience for races that are divorced of any element of human risk or drama, Di Grassi says “We don’t know.”

To integrate the two worlds of robot racing and human Formula One (or the increasingly popular Formula E series), Roborace has tweaked its competitive model. Earlier this year, the company unveiled a new model of its car that has room for a human driver behind the wheel. 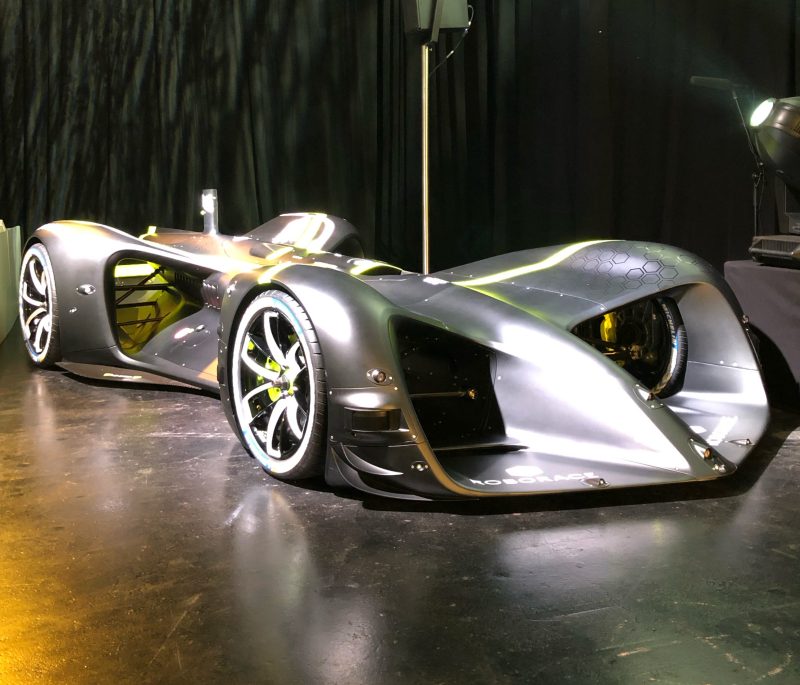 That human driver is critical to Di Grassi’s new vision for how Roborace competition will now work. In the latest iteration of the company’s races, which will see their first flag waved in April or May of 2019, human drivers will play a larger role in the race.

“We are trying to combine humans and computers in a sport,” says Di Grassi. “The races next year will be a combination of drivers racing for the first part of the race and in a pit stop the driver jumps out and the autonomous vehicle will take over. We want to create this reality that the human and the machine are working together for a better outcome.”

Di Grassi hopes that this integration of the human element and autonomy will be enough to attract viewers, but there are other ways that the company plans to bring an audience to the wild world of autonomous robot racing.

“People want to interact,” says Di Grassi. And with the company’s planned robot races, there will be ways for audiences in the stands to shape the course of the race, potentially by throwing augmented reality obstacles onto the track for the autonomous cars to avoid — creating new challenges for technology to be put through its paces.

Like traditional Formula One racing, Roborace is serving two audiences. One is the company’s actual customers — the automakers and vendors that are building the software and hardware for electric and autonomous vehicles — and the audience that ideally will be around to see the fruit of all that labor.

Right now, no automakers have signed up as partners, in part, Di Grassi says, because they’re not confident with their technology. “The automakers are afraid because the software is not ready,” says Di Grassi. But the company’s chief executive is undeterred, because of the profusion of technologies required to make autonomous vehicles work. “Autonomous cars are a combination of a lot of different technology segments — sensors, electric motors, batteries. Our customers are sensor processing companies [and] companies like Nvidia, Qualcomm, Intel,” DiGrassi says.

However, at some point Roborace needs that audience so vendors can prove that their technology works, and people can become more comfortable with the safety and capabilities of autonomous vehicles.

“Nobody’s using high precision vehicle model like drifting and sliding and these situations will be very real. There is a whole different segment that we can develop faster in a controlled environment,” says DiGrassi. “The pitch is to compete against each other to develop technology faster and you develop trust among consumers… this will give trust to people to jump into autonomous taxi in the future.”