The Salesforce AppExchange turned ten years old today and it represents quite a milestone for enterprise software development. In fact, the app store concept that Salesforce developed pre-dated Apple’s consumer app store by a couple of years.

It’s safe to say that when Salesforce launched the AppExchange a decade ago, a place where you could sell and distribute the apps you built on the Salesforce platform, there wasn’t anything out there like it.

Today, the goal of practically ever startup out there is to replicate it — to build a platform and have third parties build applications and even businesses on top of it. That’s what Salesforce has achieved over the last 10 years and it is constantly held up as an a successful example of this model.

The AppExchange was a natural extension of Force.com (now part of the broader Salesforce App cloud), a place where you could build an application using Salesforce’s development resources and find a waiting market for the software you created.

Salesforce’s, Leyla Seka, who is currently SVP & GM of Desk.com, and who worked on the AppExchange team for many years says the AppExchange was one of the things that most attracted her to the company.

“It’s been a crazy ride! The idea of delivering software the same way you could deliver products from Amazon was incredibly exciting. That’s the whole reason why I came to Salesforce. It was focused on the future,” she said.

The AppExchange and what it represents gave the first real impetus to the cloud as we know it, and it gave Software as a Service legitimacy, says Alan Pelz-Sharpe, an analyst at Digital Clarity Group.

“On demand and ASP (application service providers) had all tried without success to push what we now call the cloud model. But an open B2B exchange, exposing the underlying platform to developers meant the number of applications available exploded,” he said.

If you go to Dreamforce, Salesforce’s huge customer conference held each September in San Francisco and walk the vendor displays, you’ll find hundreds of applications built on top of the Salesforce platform. Many if not all of them are distributed through the AppExchange. 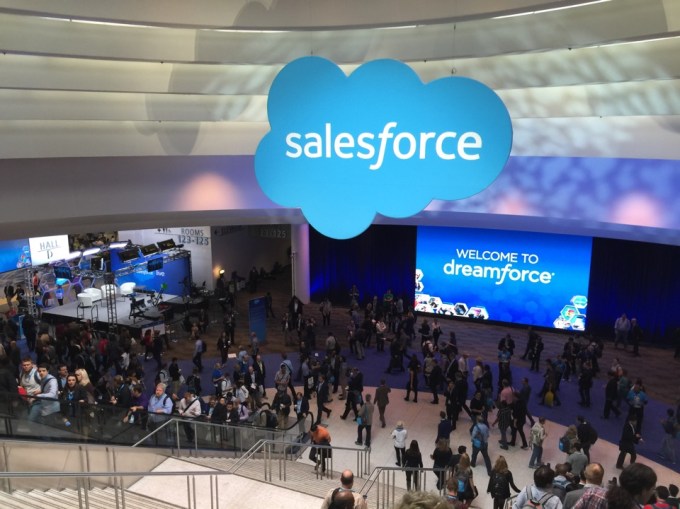 Before there was the AppStore there was AppExchange, says Brent Leary, managing partner at CRM Essentials, LLC who has been covering the CRM business for years. “It changed the way apps were discovered, integrated, developed and consumed by businesses,” he said.

Today looking back, it’s easy to see that it’s a good idea, but it was a risky move for early adopters like Kirk Krappe who launched Apttus, a quote to cash product built on Salesforce in 2006, the same year the AppExchange launched. He recognized the potential of the development platform and the app store idea.

“Having the foundation of the AppExchange to build upon saved us enormous expenses and allowed us to become more successful than we ever imagined. I think it’s fair to say, 1,000 employees later, that while we dreamed of this level of success, we couldn’t have anticipated it,” he said.

Hitching their wagon to Salesforce proved to be a wise move. “Simply put, it was because it democratized the software business – we were a handful of guys in a laundry room and it brought not only reliability and customer access, but also inherent marketing because of the strength of the Salesforce brand,” Krappe said.

Yet not everyone thought it was a great idea to build an application on someone else’s platform, at least early on. When Jeremy Roche launched FinancialForce in 2009, an ERP software package built on top of Salesforce and distributed through the AppExchange, people thought he was crazy going that route.

“When we launched FinancialForce.com, I heard all types of questions and doubts, mostly on whether I had gone mad building a company on someone else’s platform,” he said. He was placing his bet on Salesforce and it has worked out pretty well for him and his company, which has raised over $186 million.

In the end, these two companies were just a couple of examples of the thousands of developers building stuff on top of Salesforce. What Salesforce did with AppExchange was fundamentally change the way companies developed and distributed software, Pelz-Sharpe explained.

“In 2005 the cloud was novel and revolutionary. The AppExchange allowed developers and VAR’s to target the true and huge mid market with highly cost-effective, but still enterprise grade applications running on a high-end platform and infrastructure,” he said.

Today that revolutionary idea is ten years old and it’s proven to be quite a catalyst for building businesses.