Microsoft this morning has released an app for Android smartphone users called Torque that allows you to shake your phone in order to perform a voice search, similar to Google’s “OK Google.” The difference is that instead of waking up the app with a standard keyword command, it’s the shaking motion that instead does the trick. Also like Google, Torque will provide a number of “instant answers,” including things like details on local flights, stock prices, sports scores, weather, nearby restaurants and more.

Torque itself was actually released back in October, but at the time was only supported on select Android smartwatches. The app then was activated with a wrist flick. However, smartwatches are still a niche market, so it makes sense for Microsoft to expand its support to smartphones as well. (The original app has been download under 10,000 times, to give you an idea.)

The 2.0 release, out today on Google Play, also includes a few more instant answers, including flight status reports and info on local events. These answers and other results are powered by Bing search.

Early testers reported some bugs with the first version of the app properly responding to their wrist movements, or detecting their voice, but overall the app has a decent 3.9 (out of 5) star rating on the Android app marketplace after some 240+ reviews.

That Microsoft is actively developing Android applications outside of its company’s flagship software products like Microsoft Office, Xbox, OneDrive or Outlook, for example, may be news to some. But Torque is representative of Microsoft’s newer thinking which sees the company attempting to engage with the broader mobile ecosystem.

The Torque app was developed by Microsoft Garage, a group exploring, experimenting with and releasing cross-platform consumer applications. The organization, which grew out of Office Labs in 2009, is about connecting Microsoft engineers and its engineering projects with customers to see how its technologies are received. 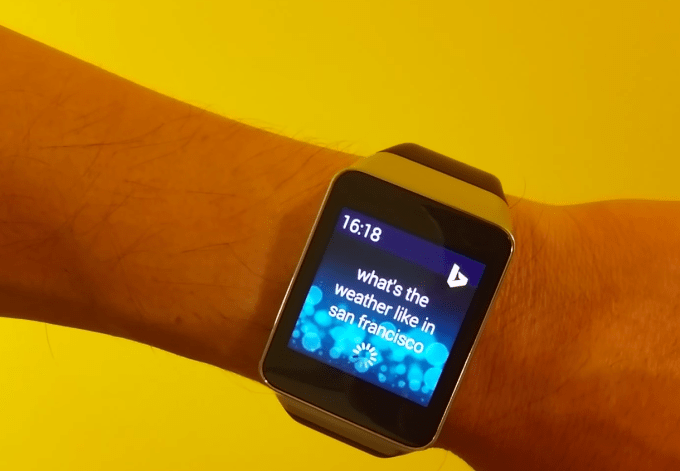 The original Torque app was built in three months’ time as a side project created by Xuedong Huang, Jiaping Wang, Lingfeng Wu and Wayne Xiong from Microsoft Garage who worked with other Microsoft researchers on the twist-to-activate motion. Huang has worked with voice technologies for some time, having founded Microsoft’s speech recognition research and development efforts in the early 1990s.

In addition to Torque, the team has rolled out a number of other applications, including Mouse without Borders (lets you control 4 computers with a single mouse and keyboard); Bus Alarm (alerts that tell you when your bus is arriving); Journeys & Notes (a social trip log app for Android); Next Lock Screen (an Android lock screen offering quick app launches and other notifications); Voice Commander (a voice-controlled Xbox game), and many, many others. If apps don’t work out, the Garage team moves on, building on top what they’ve learned as they move forward.

With something as critical as mobile/voice search, however, one would imagine Torque is the kind of project Microsoft wants to get right.