iOS saw the highest numbers in October, when it reached 61.5%, but has fallen slightly since.

Of course, it may not be fair to compare iOS directly with the other mobile platforms, given that the iPad accounts for a good bit of Apple’s market share in this slice of mobile data. But even when the iPad is excluded, the iPhone still holds its own with a 25.24% showing. The iPad is at 24.53% and the iPod Touch accounts for 2.32%. 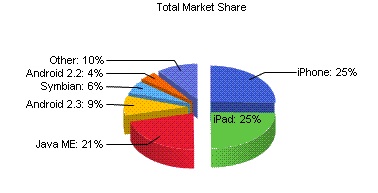