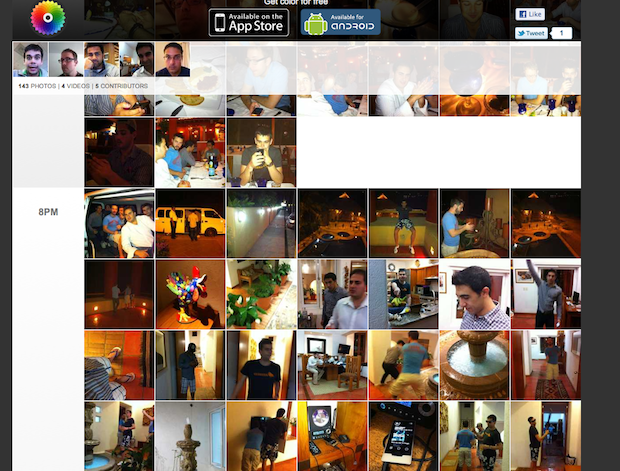 This past weekend, I headed down to Mexico with a group of friends for a bachelor party. It was a lot like The Hangover — if you replace tigers, Mike Tyson, and Zac Galifianakis with Macs, iPhones, and iPads. Clearly, we’re all in the tech scene. I bring this up because sometimes it can be telling to see what applications people actually use when they’re away from the normal routine. And surprisingly, our most-used app was probably Color.

I know what you’re thinking: Color?!

Yes, the insanely-hyped-due-to-a-$41-million-pre-launch-round app was a major companion of ours in Mexico. And we weren’t just using it in an ironic or novelty way, we were actually using it sincerely (well, as sincerely as one can use something in drunken party mode). And it made sense.

After the initial launch of Color, everyone was quick to jump on the “$41 million for this?!” bandwagon. It was both predictable and silly at the same time. This started a mere five minutes after the initial posts came out — the app wasn’t even live yet — and people were bashing it. This continued for a few days.

But a funny thing happens when you actually use the app in the way that it’s intended: it works really well.

Over the weekend, there were five of us that were using the app to quickly take pictures of what we were doing and sharing them with others within the app and via Twitter and Facebook. A bunch of us got messages from other friends and family noting how cool it was that they could follow along in real time.

You might think: who wants to follow along in real time? Well, friends and family, obviously. But it goes beyond that as well. It’s the same reason why people want to see your tweets or Facebook status updates and pictures or Instagram photos — it’s social voyeurism. And Color is perhaps the pinnacle of it so far.

It’s an extension of the reason that apps like Qik quickly rose to fame a few years ago. But the problem was that the mobile networks weren’t powerful enough yet for realtime video streaming to fully make sense. And to be honest, they still really aren’t. You’ll notice that the newer guys doing video in this space, like Color and Path, stick to short, 10 second long videos. But pictures remain the real opportunity. 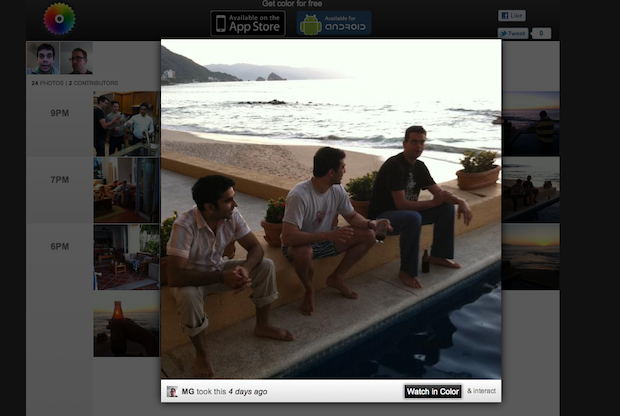 The key to Color is the right combination of behind-the-scenes set-up and quickness. Once the update was released over the weekend with a navigation that actually made sense, a major obstruction was lifted and the actual usefulness became much more apparent.

Whereas apps like Instagram, Picplz, and Path are great for sharing one-off photos, that’s not what Color is doing. Their specialty is the ability to rapidly document an event with multiple pictures (and short videos) from multiple perspectives. The result is actually quite fascinating when it all comes together. You get a sorta living, breathing photo album for an event.

Some of the photos are good, but many of them are mediocre to bad. But it doesn’t matter. It’s about the album as a whole, not a single picture.

I’ve always believed that one of the key things Instagram got right (and has spurred their quick growth) is speed. Unlike other photo-sharing apps that focus on things like picture quality and tagging, Instagram lets you get it out there as quickly as possible (with filters effectively negating the quality aspect). That’s the most important element of mobile photo-sharing, speed. And Color nails it as well.

You hit the button, take a picture, see the preview, and then the picture goes live. The entire process only takes a few seconds. Other photo apps can take upwards of 60 seconds once all is said and done — or more. With Color, there’s no need to tag your location (that’s done for you), tag your friends (that’s sort of implied by who else is Coloring with you — though it should get better as more people use the app), no need to create albums (done for you), there are no filters, and captions are optional (and not emphasized).

Don’t get me wrong, the app is still far from perfect — and I think their team would be the first to say that. But when used as intended in an appropriate setting, it does work really well. I’m looking back at the Colors we took last weekend, and they’re great. It’s like a photo scrapbook that was really easy to make. I wish I had Color at parties when I was growing up, or in college, that I could look back on now.

Maybe Color owns this space, maybe they don’t. But it has given me the strongest indication yet that there is a space here worth owning. 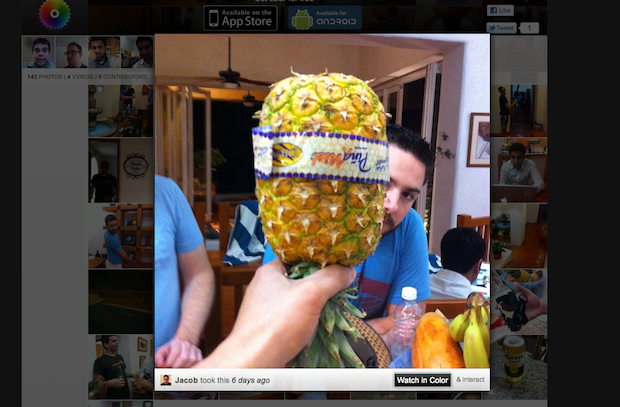