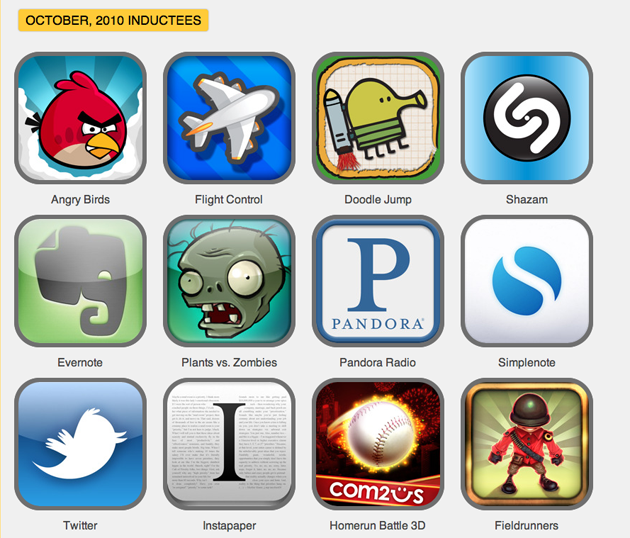 Impeccably timed with the news that apps have become as popular as news and sports broadcasts (thanks Flurry) as well as the news that Apple has trademarked the phrase “There’s an app for that,” the folks at 148Apps have taken a cue from the Baseball Hall of Fame and today launched the App Hall of Fame, which honors 12 of the very best applications each month, “no matter if they have sold 6 million or 600 copies.”

I pretty much agree with all these choices except for the ones I haven’t tried, like Homerun Battle 3D. However, the fact that Homerun Battle 3D is now in the App Hall Of Fame makes me more likely to try it, which I guess is the point of this human curated endeavor in the first place.

From Jeff Scott, founder of 148 Apps,

“There are so many really fantastic applications that were released months ago yet we only seem to pay attention to the latest and greatest. These older apps and games are ones that users need to know about, but due to the constant deluge of new applications being released they may never discover these older gems.”

Selections were made by a committee of 47 app enthusiasts and industry influencers and the only criteria for eligibility is having been on the market for 6 months. And while currently the App Hall of Fame only inducts iOS compatible apps, Scott plans on adding iPad applications by the end of the year and Android Apps by 2011.