The annals of live video are littered with cautionary tales. For every hype-driven social video startup that had a coming out party at South By Southwest, there is a matching tombstone.

On The Talk Show earlier this week I talked to host John Gruber about Meerkat. One of the concepts I floated on there is something I’ve been thinking about for a bit: The idea of services like Snapchat, Meerkat (and Twitter’s recent acquisition Periscope), YouNow, and even Vine as ‘empathy machines’.

The raw, immediate and intimate nature of un-filtered access does more than just lend a feeling of ‘veracity’ to these services.

That ‘truth’ or ‘realness’ factor is often cited as a prime driver of Snapchat’s success. I’ve heard a hundred variants of ’millennials don’t like it when video is produced or manufactured feel, that’s why they like Snapchat’. I don’t think so. I know plenty of people in that category (and younger) that watch a bunch of trashy TV that is plenty produced. It’s not the fact that it looks kind of crappy that keeps them coming back to Snapchat and that (I think) will fascinate them about Periscope and Meerkat.

Instead, it’s the empathic transaction that occurs when you’re given an intimate look into someone’s life, sans-filter. By simply eliminating the tools or time needed to stage your life, these products cut through those tendencies we have to be the thing that people think we are.

There is an exchange of emotional states between the viewer and the streamer that isn’t duplicated by any other medium. This can lead to greater understanding, a willingness to engage in a dialog rather than an argument and the broadening of worldview.

My co-editor Alexia referred to it as ‘the opposite of Instagram’, which I thought was astute (as always). With products like Instagram, you’re always ‘on’. For most people, Instagram isn’t an honest interchange of ideas or emotions — it’s performance art. You’re not presenting what you are, you’re presenting what you’d like to be. 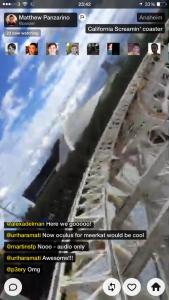 Snapchat (or Meerkat), by comparison, offer very little in the way of tools to manufacture your ideal world. They do this in different ways, of course. Snapchat and Meerkat are opposite sides of the same coin. Snapchat’s core product offers an intimate conversation from one person to another. Stories is a bit more in-sync with the live streaming of something like Meerkat, though it is still asynchronous. Don’t think that Snapchat will resist dipping toes into the other side for long, though. Real-time streaming seems a complete, natural fit for what they’re doing with Stories.

Currently, we’re seeing the phase of Meerkat where people are streaming and talking about Meerkat. Then we’ll see the bit where people are showing off all the fun things they’re doing. Then the celebrities will show up. But then, maybe, it will be the teenage girl who feels like she’s alone in the world. And she streams, and people respond and she understands she’s not.

When we get to that point — if we do — then we have something truly powerful.

Meerkat and Periscope are completely synchronous, which is both a blessing and a curse. Scaling is a total crap shoot, especially when larger platforms don’t play nice, as with Meerkat. It’s up in the air whether we’ll ever see a critical mass of people both broadcasting and watching live streams. But I’m inclined to think we will.

That synchronicity, by the way, is what has investors salivating and companies like Twitter making acquisitions so early. Live streaming literally monopolizes your entire phone’s screen and 100% of your attention. There is almost nothing else that does this. The closest thing we have to that currently is messaging apps.

If you look at all of the apps on your phone, whatever brand, there is only one application that is a biological imperative: communication. That’s why messaging apps, or broadcast apps, are so compelling. Humans must commune, there is no other option. Previously, those facilitators were the phone, then the text message. For a while now it has been images. For users of the iPhone, FaceTime has already primed you to stream video live, with all of its awkward pauses and fat-face camera angles.

And a half-dozen other factors including the proliferation of LTE, mobile devices with great cameras, the fact that mobile video actually loads and a more socially connected world have conspired to make this a very ripe time to take another stab at live video.

There is also the matter of context. A mobile device can tell the viewer so many more things. The context of streaming from a desktop is always the desktop. Here is some variation but nothing like mobile. A mobile device can communicate your location, temperature, elevation, speed and even your surroundings. This context adds an entirely new dimension that could be the defining factor this time around.

Yesterday, Twitter kneecapped Meerkat by cutting off access to its follower/following graph, but I think that might be the best thing for the product (as long as it doesn’t kill it). People that already have a big audience — journalists, Twitter celebrities, actual celebrities — are always the early adopters, but they’re sort of an echo chamber.

It’s hard to tell what the real use cases of Meerkat may actually be, and pushing them to create discovery and their own graph early on might result in a more diverse and balanced core user group. Just as ‘regular people’ use Instagram, Twitter, Vine and Snapchat in a completely different way than the cognoscente, the masses will find different uses for Meerkat.

Whatever those uses are, there is something very intriguing about an interaction model that fosters genuine emotional interchange, rather than a carefully crafted success theater.

Or we could all be writing ‘remember streaming video, lol’ articles this time next year. Either way, this should be interesting.

Post updated with additional context, and to include YouNow