Today Twitter officially announced its January acquisition of live-streaming app Periscope. According to several sources, it will be launched as a separate app from Twitter with the ability to watch both live and previously broadcasted mobile video streams. That lack of ephemerality is the first of many differences between Periscope and Meerkat, the live-streaming app that recently launched and caught on like wildfire in the tech community.

Excited to officially welcome @periscopeco to the Twitter team. Can't wait for everyone to see what they've built! https://t.co/6eAJjpXmaS

You'll be hearing more from us soon! We're gradually expanding our beta, which you can sign up for here: https://t.co/BejZaBBpLA

TechCrunch first reported the connection between Periscope and Twitter on March 4th, saying the companies were in acquisition talks and the deal might have already been done. Business Insider later reported the deal had indeed closed.

Periscope hasn’t launched yet, but will soon begin expanding its beta. Here’s how it’s said to work.

When you open Periscope, you can see live broadcasts happening now or watch recently recorded ones. Periscope will allow both public and private broadcasts. You’ll be able to blast out a link to your stream to Twitter and have it show up on the Periscope home screen, or alternatively privately invite a few friends to watch. A screenshot from Meerkat

Feedback from the audience is a major component of Periscope. It’s how the app will keep people who aren’t broadcasters engaged. You can post comments on streams, which pop up in front of the broadcaster and other viewers. However, these comments aren’t syndicated to Twitter, so there’s less of the chilling effect on commentary found in Meerkat. Viewers can also shower broadcasters in animated hearts to show their appreciation, which sources say is a delightful design flourish.

To offer an experience that feels live even if you’re watching a replay, all the comments and hearts will replay in sync with the video as if you’re watching it in real-time. The hope is that a community of star creators emerges on Periscope, similar to the ecosystems that have developed on Vine and Snapchat. Mainstream celebrities could also become a major broadcaster demographic, using Periscope to intimately reach many fans at once.

Fervor built around Periscope thanks to a carefully planned private beta dating back as far as November with some of Twitter’s founders, top investors, and other tech industry elite. The joke was that this was a Fight Club-esque beta where “The first rule of Periscope is you don’t talk about Periscope.”

When Dick Costolo’s company was courting Periscope, a source says the company told Periscope it believes video is a major part of the future Twitter. To that end, on top of the cash paid, which was reported to be about $100 million, Twitter is said to have put up a significant stock compensation package. The idea is that if Periscope can make livestreaming blow up, Twitter’s valuation will rise, and the startup’s team will get even richer. 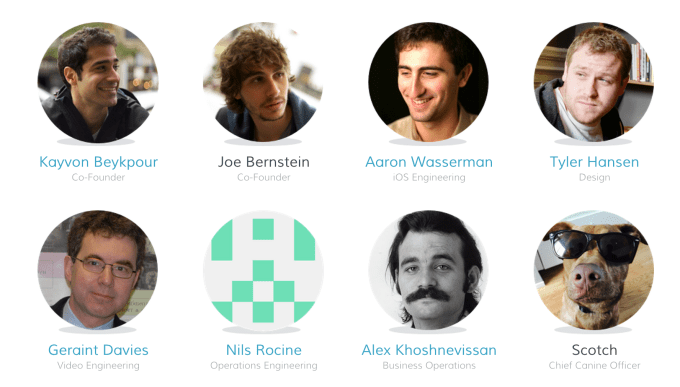 What’s unfortunate is that Twitter will have to launch Periscope into a frenzy of comparisons to Meerkat, a more rough-shod app built in 10 days by the startup Life On Air. Meerkat doesn’t allow you to watch recorded broadcasts or set up private streams, and its entire identity, communication, and distribution system is built on Twitter.

It seems that Twitter was hoping to keep polishing Periscope until it was perfect, but accidentally ended up missing the chance to be the first in the most recent wave of live-streaming apps. While many I’ve talked to who’ve used it think it’s a much better app than Meerkat, it will still have to try to leapfrog that app’s existing network effect.

Some wondered if mobile livestreaming would be a fad. Yet Twitter seems convinced that Periscope could become a big part of how it fulfills its mission to “To give everyone the power to create and share ideas and information instantly, without barriers.” While Twitter asks you to describe in text “What’s happening?”, Periscope will let you actually show people.