Seventy percent of American car owners overpay for insurance because they don’t drive much. Luckily, today MetroMile comes out of stealth to launch its per mile car insurance. The $14 million-funded MetroMile gives away a plug-in device for your car that connects to a free app that teaches you how to spend less on gas and shorten commutes. If you drive under 10,000 miles a year, you can buy its insurance to save an average of $400 a year.

“The existing instance companies want to see us fail”, MetroMile co-founder and CEO Steve Pretre tells me. I’m inside the startup’s hip gallery-style office space behind The Creamery in San Francisco, where little brown boxes covered most of the services. MetroMile was frantically preparing to ship 10,000 of its free car analytics devices today, — devices that could disrupt the whole car insurance business.

You see, until now, insurance companies couldn’t measure how much people actually drive. They couldn’t tell who drove tens or hundreds of thousands a mile a year and who drove just a few. So instead they the 70% of car owners who drive less than the mean subsidize those who drive much more. Pretre exclaims “that’s not fair.” 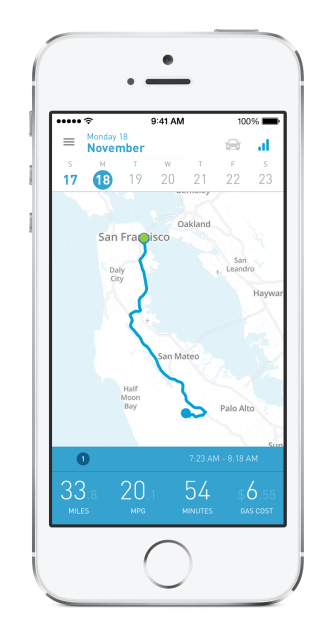 If you live in a city, you probably don’t drive much. You park it and use a bike, public transportation, or car service like Uber during the week; but drive for recreation or errands on weekends. “For these people, insurance can be over half the annual cost of the vehicle. They’re paying a lot for insurance but not using the car much” Pretre explains.

Dave Friedberg had a revelation two years ago while running The Climate Corporation, a startup that used weather prediction machine learning to sell real-time priced crop insurance to farmers. Friedberg sold The Climate Corporation to Monsanto for roughly $1.1 billion. But by 2011, he’d already realized that transparent pricing for insurance could be revolutionary for urban car owners, not just rural farmers. MetroMile was born.

Soon Friedberg had raised $4 million from First Round Ventures and SV Angel as well as Climate Corp investors NEA and Index Ventures. Friedberg became chairman of the board to concentrate his day to day on Climate Corp, but assembled a team of including Pretre, who’d worked at insurance-related companies like Asurion and Risk Management Solutions, and CTO Dan Preston, the former CTO of AisleBuyer which was acquired by Intuit.  In April 2013 the squad raised another $10 million from existing investors as well as AmTrust Ventures, Allen and Company, and Felicis Ventures, and set off to change the way we drive.

A FitBit For Your Car

It starts today, as MetroMile distributes 10,000 of its free Metronome devices that plug into the diagnostic system under the dashboard of any car made since 1996. The GPS and cellular-activated box reads various metrics and diagnostic codes from your car, and relays the info to the MetroMile iOS app on your smartphone. “The devices are pretty much off the shelf. We focus on the software layer” Pretre tells me. 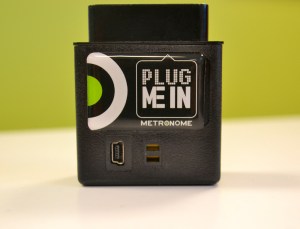 The iOS app (Android in development) shows you miles per gallon, how much that gas costs you, the minutes you spend driving, and a slew of weekly summary statistics. Over time it tracks your common commutes, and can tell you which routes get you there the fastest and cheapest. It’s like Waze but that factors in gas costs. The MetroMile insights go as deep as to tell you that if you started your commute 10 minutes earlier each day, you’d save 15 minutes in traffic and $30 a month on gas.

MetroMile’s app even helps you call roadside assistance, report a broken window, or a keep a copy of your proof of insurance card.

The Metronome’s GPS also allows it to function as a great “find my car” app, and even track down your vehicle if its towed or stolen (though the device can be ripped out so it’s not sold as a Lojack competitor). “One customer had a Ferris Bueller moment and said she found her mechanic was using her car to drive to the mall” Pretre laughs.

The device will compete with other car analytics systems like Y Combinator’s Automatic, whose device provides real-time driving feedback by beeping when you stop or start too fast. There’s also the Kickstarted Dash dongle, crash detection plug-in Splitsecnd, car health checker apps/devices Carvoyant, CarMD, AutoMD, and RepairPal. The problem is most of these devices cost an upfront fee, charge a subscription, or run off Bluetooth tethered to your car. MetroMile’s free device and cellular service could help it grow faster than competitors.

MetroMile can give away its app and device for free because it plans to earn money selling insurance. Today, its pay by the mile insurance service launches in private beta in the state of Washington after a successful alpha test in Oregon. The startup is pushing hard to get the insurance plans approved in more states by the beginning of 2014, and every state eventually. 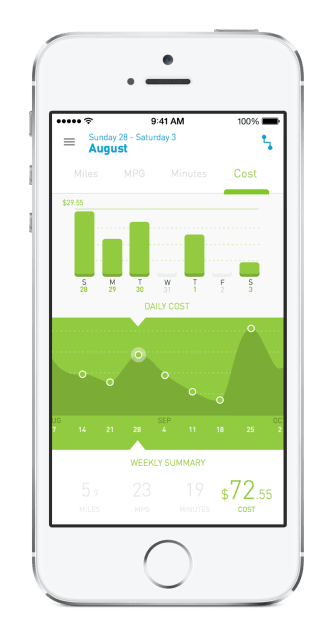 MetroMile insurance works just like any other plan. It assesses your demographic and driving history, and you get an array of deductible and liability options. What’s new is that your final price includes a base price but is mostly made up of a per mile rate that averages around two to four cents.

If you drive under 10,000 miles a year you’ll save money, and tests find the average customer who does saves $400 a year, or about 40% off their insurance bill. And if you go on a road trip, you won’t pay past 150 miles a day in Oregon or 250 miles a day in Washington, so it still works if the open highway calls to you on occasion.

“The best customers are being discriminated against, because traditional models are priced off of averages. If you’re a good customer, the models aren’t aligned with you” Pretre notes.

Though MetroMile is a startup, it essentially white-labels the insurance from a major carrier that carries the risk and pays out if there’s an accident. MetroMile gets a cut of the insurance fees.

Typically the car insurance business has 65% of fees paid out as claims, and a 5% margin after factoring in marketing costs, which are big since so many insurance plans are essentially the same. MetroMile hopes the other services it offers will bring in customers, so it can make a bigger cut because it handles sales but doesn’t have to buy television ads.

The model could uproot the insurance business, which Pretre tells me “still runs on mainframes. We threaten the model they’ve put in place. They’re reluctant to see this model succeed because they would have to restructure their model and cannibalize their existing business” Pretre says. “We’re a significant challenge to them…and insurance is a $180 billion a year market in the US.”

These old, giant companies aren’t to be underestimated, but I think MetroMile has a really appealing value proposition

“You Own The Car, We Take Care Of Everything Else”

“It’s about fairness, simplicity, and transparency. The data in the car should be an asset to the consumer. Insurance is the first proof point that we can take a complex service, reinvent it, and deliver it” Pretre says, looking to the future.

Eventually, MetroMile wants to put these values to work on car maintenance and gas pricing. It could tell you where the best place to fill up your car along your route is. And in what could be a huge wallet-saver, the app could give you a read-out of all the issues with your car so when you go to the mechanic, they can’t scam you. Pretre says “When the ‘check engine’ light comes on it shouldn’t be a moment off fear for the customer. We’ll take care of it for you.”

With Metronome boxes piled high around the office and just a few days to launch, CTO Dan Preston concludes “Driving used to be fun. Taking kids to the lake. Now it’s a commenting hassle, you have all these stresses around it.  We want to give people a chance to enjoy driving again.”

You can sign up now for MetroMile insurance in Oregon and Washington, and people there and in San Francisco can get a free Metronome.