We told you about a new feature from the Snapjoy team just the other day, but it seems like things are picking up for the small Boulder company.

I truly feel like co-founder Michael Dwan understands the dilemma of keeping all of your photos online and in one place, better than most companies I’ve ever discussed the subject with. It’s that, combined with a beautiful design and comprehensive, yet simple, feature set, that impresses me.

An obvious next step, after fully launching its pricing plan sometime soon, is a mobile app. The company is apparently starting with its eye on iOS, with later plans for Android. That seems to be a common theme, just ask Instagram.

I’ve gotten my hot little hands on the app, and it didn’t disappoint. I’m not sure how early this build is, or when it will be submitted to Apple and then released, but I’m digging it. I hope that they don’t mind me publishing some screens, because it’s worth keeping an eye on in my opinion.

As you’d expect, the Snapjoy Timeline design comes over to iOS and is a great way to go through photos you’ve taken in the past. Not just last week or last year, but like 10 years ago if you have digital photos that go that far back: 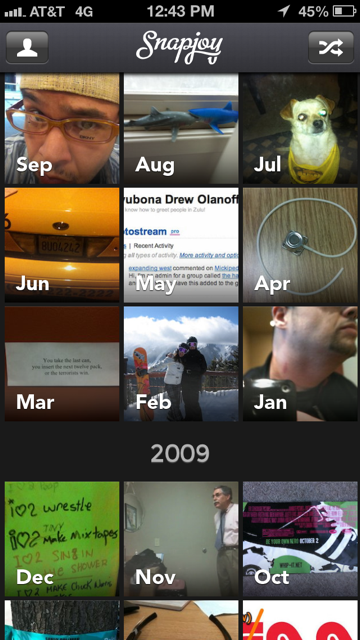 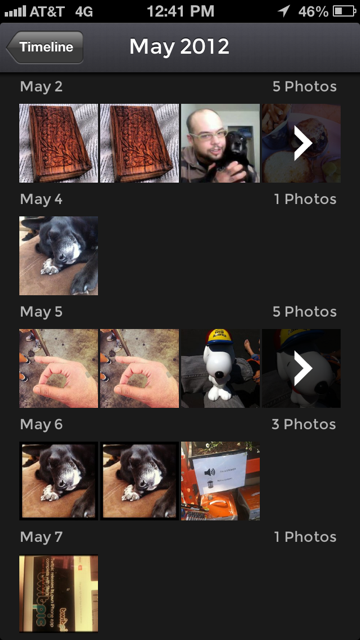 Right now, you can import your Picasa, Flickr and Instagram photos, or upload them from your computer. I’d love to see a Facebook import super soon, though.

To me, this is exactly how photos should be handled in the “cloud.” While Apple has its photostream and iPhoto offerings well integrated into users’ experiences, there is definitely a spot for Snapjoy to jump in and take over some serious marketshare. What’s next? Maybe more funding? Potentially, but the Y Combinator group has been doing just fine with its seed round.