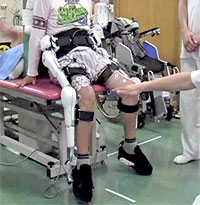 We’ve spent quite a few posts covering HAL-5, the awesome robot suit that can make paralyzed people walk. Its maker, Japan-based robot venture Cyberdyne (yes, that’s the real name), is now introducing a new version that’s designed for people who suffer from muscle diseases and are in danger of losing their ability to walk.

The “conventional”HAL-5  robo suit helps paralyzed persons walk (and lift heavy objects) by transforming brain signals sensed through the skin into motion. Cyberdyne has now modified the suit so that it can detect signals coming from extremely weak muscles, too.

According to a report in Japan’s biggest business daily The Nikkei, Cyberdyne plans to start clinical trials of the new robot suit in 2012. The studies will last until 2014 or 2015, with the company hoping it will slow down or even stop the diseases the wearers suffer from.

A total of 5 Japanese hospitals will take part in the trials.

Sorry for the small picture  – it’s the only one available from the new version at this point.