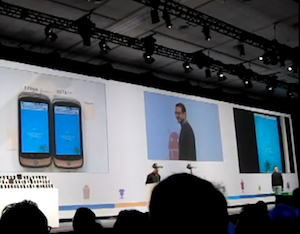 Today at Google I/O in San Francisco, Google unveiled its new version of the Android operating system, 2.2, dubbed “Froyo.” While it’s not available just yet, Google put it all on display on the stage during the keynote. Perhaps the most impressive moment was when they demoed the performance increases in 2.2 compared to Android 2.1 — and compared to the iPad.

In the video below, 2.2 is the phone on the left, 2.1 is the phone on the right. And on the other side of the stage on the other screen is the iPad. All the devices have a 1 Ghz chip, and all are running the same (web-based) app (in which a creature races around a screen). As you can see Android 2.2 not only blows away Android 2.1, it destroys the iPad as well. In fact, it laps the iPad a few times over.

Obviously, this is just one app, presumably designed to show raw speed, but it’s impressive. Google claims that with Froyo, Android users will see a 2x to 5x speed increase (over the previous build of the OS). It looks like they’re telling the truth.