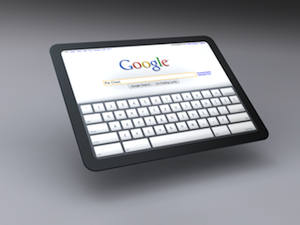 The Wall Street Journal has just put up a very short post indicating that Verizon is working with Google on a tablet computer. But this isn’t speculation or a flimsy report based on unnamed sources — Verizon’s CEO Lowell McAdam told the paper as much today.

This move is apparently a part of the carrier’s plan to match the deal rival AT&T has with Apple for the iPad. McAdam calls tablets the “next big wave of opportunities.”

Just as interesting is this part of the story: “He said the work on a tablet is part of a deepening relationship between the largest U.S. wireless carrier by subscribers and Google, which has carved out a space in mobile devices with its Android operating system.” Given the growing rumors that Verizon is gearing up to launch a CDMA version of the iPhone — perhaps as soon as later this year — this statement is very interesting, to say the least. Several weeks ago, multiple reports had Apple CEO Steve Jobs saying that Apple’s iPhone was at war with Google’s Android platform. Tensions between the two sides continue to rise.

You have to imagine that Apple can’t be too pleased with Verizon so publicly backing Google — though it’s not clear if the Verizon Google tablets would run Android or Google’s still-unreleased Chrome OS (Update below, it’s Android). Regardless, it will compete with the iPad.

Earlier this year, Google began posting mock-ups of what a tablet running Chrome OS might look like. The image seen above is one such mock-up. If Apple isn’t happy about Google competing with Apple in mobile phones, this is about to get a lot uglier.

The big question is: will it get ugly enough that Apple will re-up with AT&T and forget about a Verizon iPhone? Or maybe they have already, which is why McAdam would make such a pro-Google statement? The next few weeks leading up to Apple’s WWDC event in June should be interesting.

Verizon declined to say who would manufacturer such a tablet or when it would be released. But more details are apparently coming later this week. We can probably expect to hear more about this at Google I/O next week, as well.

Update: Bloomberg got more information in confirming the news with Verizon. Apparently it will be an Android-based tablet. Yes, Apple must be pissed.

Below is a Google-made demo of what a tablet running Chrome OS could look like. Again, the Verizon tablet will apparently be Android-based, but you can get some idea of what Google is thinking with tablet-based computing.