The firm reports that among U.S. homes that are capable of over-the-top streaming, 19 percent of their TV time was spent on streaming during fourth quarter of 2019. Within that streaming time, Netflix accounted for 31 percent, compared to 21 percent for YouTube, 12 percent for Hulu, 8 percent for Amazon and 28 percent for other services.

The Gracenote data also allows Nielsen to analyze the full universe of content available to U.S. viewers — yes, there’s a lot of content out there. The firm concludes that through December 2019, viewers had access 646,152 unique program titles, up 10 percent from 2018. And among those titles, 9 percent were available exclusively on subscription video on demand services like Netflix. 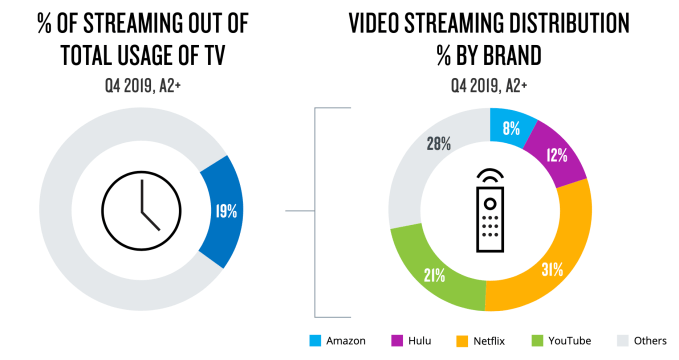 Meanwhile, on the audio side, 63 percent of respondents said they pay for at least one streaming subscription, while 53 percent paid for two.

That’s 1 hour and 24 minutes of additional media exposure across all platforms from third-quarter 2018, which was driven by smartphone usage. That is a great amount of the waking day for consumer connectivity, so this amount of time is especially eye-opening. Marketers and content creators have literally every waking hour of a consumers’ day to put forth their best messages.