At last year’s Worldwide Developer Conference, Apple announced the new app Siri Shortcuts, which allows iOS users to create custom voice commands for their apps. Today, the company unveiled a series of updates to its Siri Shortcuts app to improve the experience for users and app developers alike. It also noted the app would now come pre-installed on iOS devices as of iOS 13 instead of being offered only as a download from the App Store.

In today’s version of Siri Shortcuts, users are prompted to record their own voice command to launch a favorite app or take a specific action. For example, “order my coffee” could trigger a mobile order placed in a coffee shop’s ordering app. Developers have been able to place a button in their app to direct users to create a Shortcut as well as suggest a phrase as part of this process. However, users would have to actually go through the steps of pressing record and saying the command before they could use it.

That may have impeded some users from adopting Siri shortcuts. Maybe they were confused about the process, or didn’t want to perform the extra steps. Or maybe they tapped the “Add to Siri” button to see what it did, but weren’t in a place where they wanted to record their voice command — like in a public place, perhaps.

With the updated Siri Shortcuts, developers can suggest a voice command as before, but instead of recording it, users can opt to use it with just a tap of a button.

Apple is also responding to one of developers’ biggest requests with the introduction of parameters in Shortcuts. This will make Shortcuts more conversational, Apple explains. For example, if a user wanted to find something to cook from their preferred recipes app they could launch it via a Shortcut to see a list of their favorite recipes. When they picked a recipe from the list, it would then take the user to that recipe and start playing the cooking instructions.

This is made possible through Siri’s new ability to ask follow-up questions. If you told Siri to order takeout, for example, the assistant may ask which order you wanted.

Another new feature, also by popular request, is support for automation. This is available from a new Automations tab in the app and allows users to set when to run any Shortcut when creating a custom command in the Siri Shortcuts apps. For instance, you could configure a Shortcut to run based on time of day, when you start a workout on your Apple Watch, when you connect to CarPlay and more.

The editor in the updated Shortcuts app now enables full configuration of an app’s actions, including the ability to pass information in or out of the action through parameters. This allows an app’s actions to be combined with others for more robust, multi-step shortcuts. In practice, this would allow users to do something like run a Shortcut for a restaurant delivery app, choose their meals, place the order, then text the whole family what’s for dinner and when it will arrive. 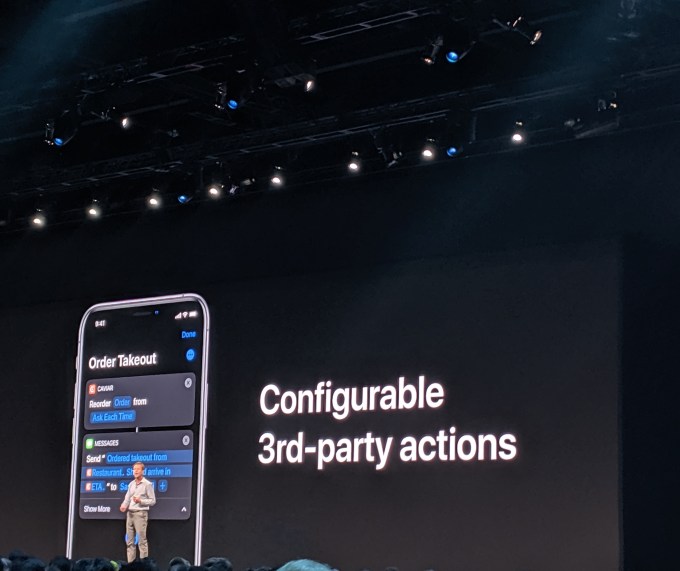 Siri is also getting smarter about when to suggest a shortcut to the end user, which could increase user adoption, says Apple. In iOS 13, Siri can detect events in your apps and create suggestions to add them to Calendar, reminders to check in with your app or directions when needed. This learning takes place on the device, not in the cloud, in order to protect user privacy.

The Shortcuts app itself will also have an improved gallery view in iOS 13 where you can see preconfigured shortcuts from your apps.

All the Shortcuts work across Apple’s platforms, including iPhone, iPad, Apple Watch and HomePod.

The changes to Shortcuts were announced this afternoon to developers attending Apple’s Worldwide Developer Conference.

Earlier in the day, Apple announced a new more natural voice for Siri and the ability to respond to messages via Siri using AirPods.

Google and Amazon today get a lot of attention for their voice platforms because of HomePod’s niche share of the consumer smart speaker market. But Apple today reminded the audience of Siri’s massive reach. Its intelligent assistant today has more than 500 million monthly active devices making more than 15 billion requests, the company noted.

[Correction: An original version of this story contained a typo. It is 15 billion requests, not million.]