Oculus wants VR to bring its users into magical worlds dreamed up by game developers, but the company also needs people to see the headset as a way to access the far corners of the real world alongside others.

The Oculus Venues app is launching today for the company’s standalone Go headset, as well as the Gear VR. Venues marks a central hub for live events on the service, putting users in a shared social space to watch sporting events, concerts and shows. Facebook isn’t setting up cameras at these events, rather, they’re working with partners to put on these events, including NextVR, AEG Presents, the MLB and Lionsgate.

The app was announced earlier this month at Facebook’s F8 developer conference, but Venues wasn’t quite ready for primetime. Today, Oculus is sharing the first chunk of events, all scheduled for the summer, and it seems pretty robust.

Events include concerts with artists like Chromeo, movie screenings of films like Reservoir Dogs, MLB games and soccer matches, as well as plenty of comedy shows. For the most part, events seem spaced out every couple of days or so, but this is still a lot of VR content for headset owners coming from the service’s first few partners.

The first event is a Vance Joy concert tonight at 7:30 PST. Here’s a full list below, but it’s tiny so break out the spectacles. 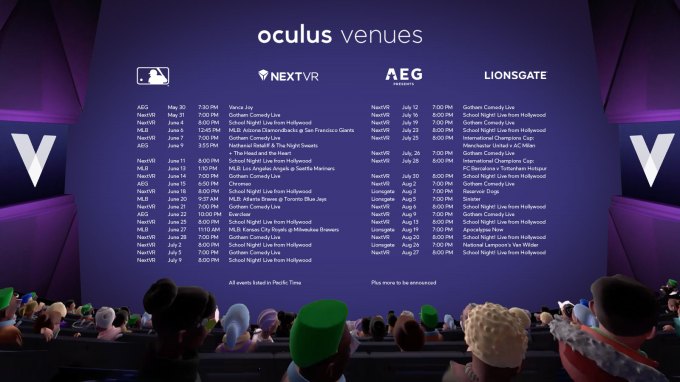