It’s hard to face the business of death when you are busy living. According to one survey, 51 percent of Americans aged 55 to 64 don’t have wills. Even if they have prepared estate documents, their adult children often have no idea where to find them. Fresh from the latest Y Combinator batch, Willing is a startup that takes on the $20.7 billion per year U.S. funeral industry by making arrangements simple and painless (or at least as painless as anything that involves contemplating your mortality can be).

Along with YC, Willing’s investors also include 500 Startups, Sound Ventures (the venture capital firm founded by Ashton Kutcher and Guy Oseary), and Gary Vaynerchuk. The site launched on June 1 and will have helped users complete 10,000 wills within the next few months, say founders Eliam Medina and Rob Dyson.

Medina got a firsthand look at the difficulty of making final arrangements after a family emergency.

“It was so painful. It is the worst possible time, you are trying to deal with these issues, and then there are three separate transactions: the lawyer, the cemetery, and the funeral home. It feels like everyone is trying to look out for their best interests and not yours,” he says. “I was disturbed by it. I’m married with two little girls and my wife and I wanted to get our stuff in order. The process was crazy, and I wanted to do something about it.”

Willing is divided into two main products. The first is an online tool that helps users create a will or living will (a document that outlines their wishes for end-of-life care) in minutes. The second, which Medina and Dyson are currently fine-tuning, is a platform that lets users find and compare costs for funeral homes and cemeteries.

Making a will on Willing is very easy. Aside from basic information, like the names of your beneficiaries, there are no forms to fill out. Instead, you answer questions for each section (distribution of property, final arrangements, executors, etc) by clicking buttons. Willing generates a document and instructions for how to make it legally valid by having it signed in front of witnesses. It took me less than five minutes to make a basic will on the site. 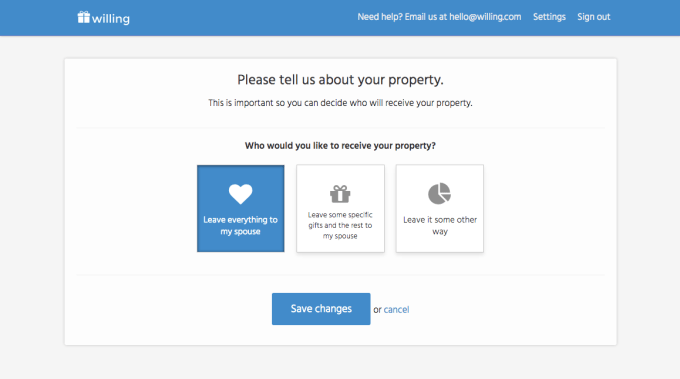 To be sure, there are already other sites and software with features designed to make writing wills less onerous, like LegalZoom and Quicken WillMaker. Aside from its simplicity, Willing’s main selling point is that you can prepare estate documents for free.

The startup’s founders are adamant that your data will never be sold. Instead, Willing plans to make money by helping people find funeral homes.

As Jessica Mitford’s investigative journalism classic “The American Way of Death” showed, arranging a funeral in the U.S. is a labyrinthine process that is difficult and costly to navigate. While most funerals are still planned by visiting cemeteries and mortuaries, Medina and Dyson believe that people will become comfortable with making arrangements online. More than 40 percent of Americans are now cremated, compared to just three percent in 1958, signifying demand for simpler end-of-life arrangements.

“We want to do it online to consolidate the death care and estate planning industries. You have millions of lawyers, tens of thousands of small, mom-and-pop funeral homes, and we want to make it more streamlined for customers,” says Medina. 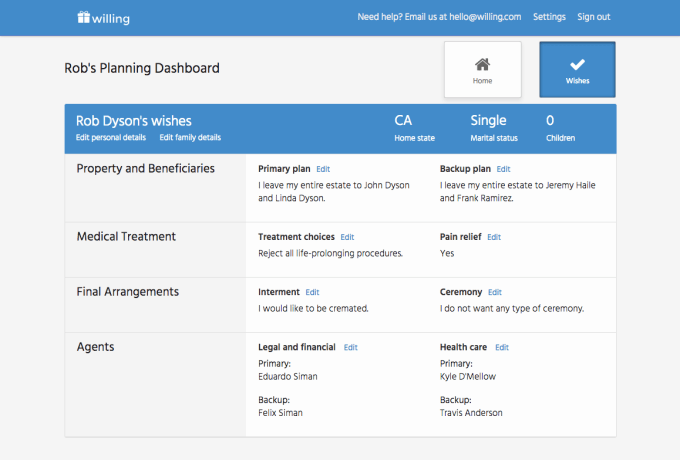 One of Willing’s goals is to make expenses more transparent. Funeral homes are already required by law to disclose the cost of every service they perform, but prices can vary dramatically between businesses and add up quickly, with the average U.S. funeral ranging between $7,000 to $10,000. What Willing gives customers is an online platform that allows them to compare the costs of cremation, internment, and ceremonies.

“Nobody likes to plan for a funeral. No one says, I had an awesome weekend, I went to four funeral homes. Typically, this all happens because someone close to you passed away or got sick,” says Medina. “When you start the process this way, there is not a lot of price comparison going on, and that is why we believe in starting early. If you start too late, it’s very unlikely people will go searching for different funeral homes.”

(Of course, as with any startup, there’s always the possibility that Willing will fold before its customers do. In that case, Medina says the money they have paid for funeral arrangements will be refunded.)

Willing doesn’t plan to provide its own funeral services, but will instead partner with local providers. This can mean more business for funeral homes, which have seen less business as direct cremations, which account for half of all cremations, rise in popularity.

One of the reasons people chose to do direct cremations (which means a body is taken directly to a crematory) is because the traditional process of shopping for a funeral home is time-consuming. First, a plot or niche has to be located at a cemetery and purchased, a process Medina compares to a real estate transaction. Then a funeral home has to be selected to handle ceremonies and preparation of the body.

About one in five Americans over the age of 40 have already started preplanning their own burial or cremation arrangements, but they run the risk of their funeral homes going out of business or relocating—or they might move to a new area first. By consolidating several providers on its site, Willing hopes to eliminate that problem by giving its customers plenty of good alternatives.

“The dream here is never having to step foot in a funeral home or cemetery, which are very difficult environments to make objective decisions in,” says Medina. “We’re trying to make the process as objective as possible.”