It’s New Build Day for Microsoft kids, as the Redmond software shop dropped new code that will bring Windows 10 to a host of smartphones that were previously not able to handle to the beta operating system.

The build, number 10051, brings a host of new features to Windows 10 for phones, including refreshed core applications and the Project Spartan browser that has already cropped up for PCs running Windows 10.

Also in the mix is a new “universal” Maps application. Microsoft is working to bring all of computing under a single roof. That makes the Maps app important: Here is Microsoft showing off how apps will scale from small to large across various screen sizes.

According to the company, the new app “includes the best maps, aerial imagery, rich local search data, and voice-guided navigation experiences from both Bing Maps and HERE maps, integrated together for the first time into a single app for Windows.”

If you want the new build, make sure that you are on the fast release ring. Otherwise, you will have to sit tight.

The development pace of Windows 10 remains rapid. It’s been notable to watch the enthusiasm gap between the current Windows 10 release cycle, and what took place with Windows 8. That’s to say that people seem to care more this time around.

An example of this is my new Twitter nemesis, Gabe Aul from the Windows 10 team, who regularly racks up oodles of favorites for his oracular drippings concerning when new code might, or might not, land: 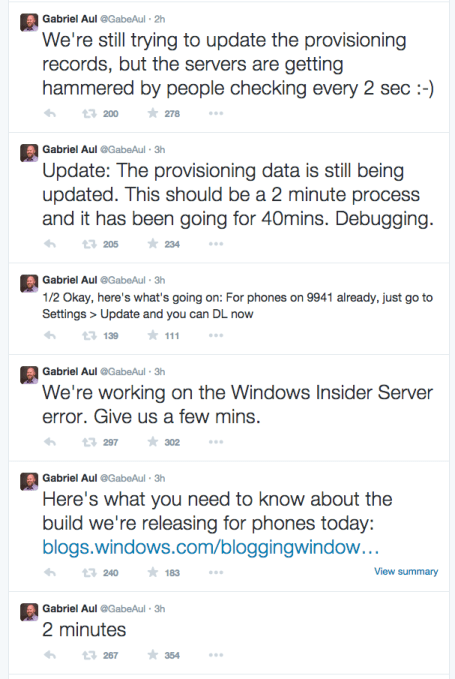 Riveting. You can check shots of the new build here.