There will also be a mobile app available for Android initially to allow users to edit and create these maps on the fly. The app, called Google Maps Engine, will allow access to any level of GME service.

Brian McClendon, VP of Google Maps, noted that there are still 1 billion monthly users of Google Maps but also over 1 million active sites and apps using the APIs.

McClendon says that Google is also after semantic data, including local location, imagery, Street View and base maps. Each of those layers must be collected separately and sometimes includes mistakes. Google has spent a lot of time creating what it calls a ‘canonical base map of the world.’ This map allows it to answer questions like ‘how do I get there?’

But on top of all of those data layers is something Google is calling the Knowledge Layer, which contributes to people’s ability to get questions with more complex parameters answered.

All of these layers service consumers and the enterprise on either end of the scale. Now, to service those in the middle, like small businesses, Google is introducing Maps Engine Pro. It’s a tool that allows businesses to create internal- and external-facing maps that utilize its data layers to make business decisions.

Among the decision-making tools will be the ability to optimize the locations of your people and company assets, engage your users and build apps that take advantage of all of Google’s layers.

Google’s Vinay Goel, Google Product Manager on Google Maps, detailed how professionals could use some of these tools to solve problems.

One example Goel gave is that an insurance underwriter should have easy access to your location and the canonical data surrounding the risk profile of your neighborhood in order to calculate your plan and premium.

The pricing of Maps Engine Pro is $5 per user per month or $50 per user per year depending on the license usages.

Here’s an example of a map that you might see created in Maps Engine Pro: 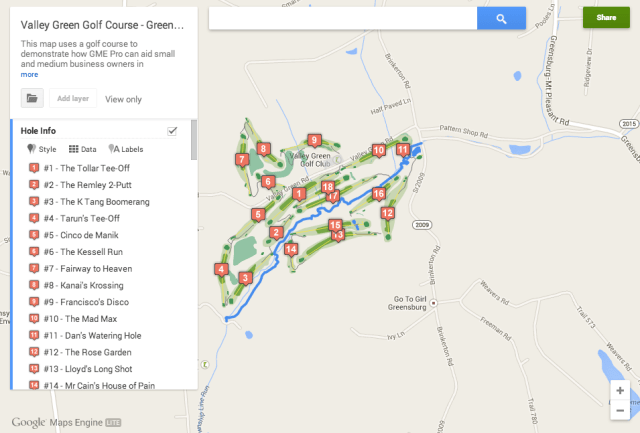 Heather Folsom, Product Manager of Google Maps Engine Pro, spoke about the capabilities of the new service. Basically, you’re able to upload a spreadsheet of data that you might have with locations or other mappable data and see it instantly visualized. You can then sort or filter it and use it to craft strategies.

Pure Fix Cycles has been one of the testers for the program and a video shown to press at the event noted that MEP was used to visualize where the customer service calls were coming from on the East Coast. This allowed them to see where the best locations might be to send those callers to get service, which stores had the most inventory of the parts that were needed to fulfill those orders and more.

A demo was also given of placing a downloadable database of publicly available San Francisco planning department data on a map. Once imported, it could be easily filtered by any of the criteria in the data columns in a ‘Google Docs’-style spreadsheet. Editing this spreadsheet in ‘live’ fashion results in the points changing on the map. 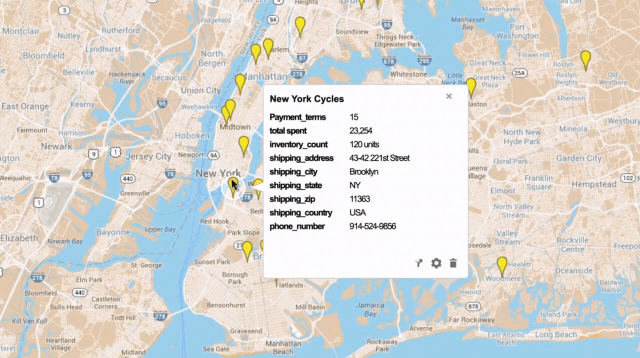 Though this might appear, at first glance, to be Google tooling its Maps Engine product down a bit, it’s actually more about boosting the consumer maps offerings to be more useful to small businesses or pros.

The consumer tools that allow users to build custom apps are all well and good, but entering data that an SMB might have in its databases is tedious and doesn’t have the flexibility needed to create custom reporting tools and analysis. And on the other end of the range, the full-blown Google Maps Engine product requires some fairly serious geographic information systems chops to craft useful tools for internal use.

Google Maps Engine Pro is about making those tools more friendly and accessible, letting small business owners and other ‘professionals’ visualize their mapping data, rather than trying to do so internally from a spreadsheet list of locations. The key is being able to easily import and filter that data by a variety of factors. Just going by the demos that we saw, this appears to be fairly quick and easy.

It should be an interesting additional layer of data that helps businesses make decisions based on location data. Just a couple of years ago this type of tool might have to be manually crafted by a developer or contractor, or cobbled together out of open-source mapping data and tools.

Goel says that Google hopes that GME Pro will sit alongside documents, spreadsheets and storage that businesses will use daily to make decisions and get things done.

You’ll be able to find out more about the new Maps Engine Pro tool at Google’s Enterprise mapping site today.