We’ve all dealt with the frustrations of auto-correct, from unintentionally declaring that you’re getting a divorce to having your bitter, angry diatribe suddenly mutate into something involving a lot of “ducking”.

Fortunately, these unwanted auto-corrections are generally little more than inconveniences. You laugh a little, backpedal as fast as possible (“I meant porkkkk”), and move on.

For one Dallas start-up, though, a rather sneaky autocorrect issue is the cause of all of the ultimate discoverability issue: no one can find their new app.

A few weeks back, Locai launched an iPhone app. Intended as something along the lines of Foursquare with a heavier focus on conversations, it found a reasonable amount of success — at least, enough that they were encouraged to launch an Android port.

And that’s where things got sticky. Locai launched their Android app… but even days later, it was no where to be found in the Android Market. After some investigation, Locai found the issue: somewhere on the backend, Google’s Android Market is autocorrecting all searches for “Locai” to “Local” without alerting the user. As a result, would-be Android users just can’t seem to find the app.

Update: It appears that Google fixed the issue detailed here within about 48 hours of this post going up. The app in question now shows up as the only app when you search for its name.

“Since everyone downloads apps by searching for them first this is a huge blow to us,” said Taylor Cavanah Locai’s founder. “We have brands and businesses lined up for a whole series of partnerships, events and promotions over the next several months. Now we’re facing losing a ton of users and investment as people are converted to download the app, but can’t find it.”

Of course, there are tricks to force the Android Market to search for verbatim terms (searching for “Locai” [in quotes] or +Locai, for example) — but is this something that most users would ever even think to try?

Now, a week after launch and with downloads flatlined, Locai is stuck in a bit of a corner: do they change their name (thereby abandoning whatever progress with the brand they’ve made so far), or do they just sit back and hope Google is willing to implement a fix (like prioritizing exact matches before showing autocorrect results)?

Meanwhile, anyone who actually is looking for Locai for Android can find it right here.

Update: It appears that Google fixed the issue detailed here within about 48 hours of this post going up. The app in question now shows up as the only app when you search for its name. 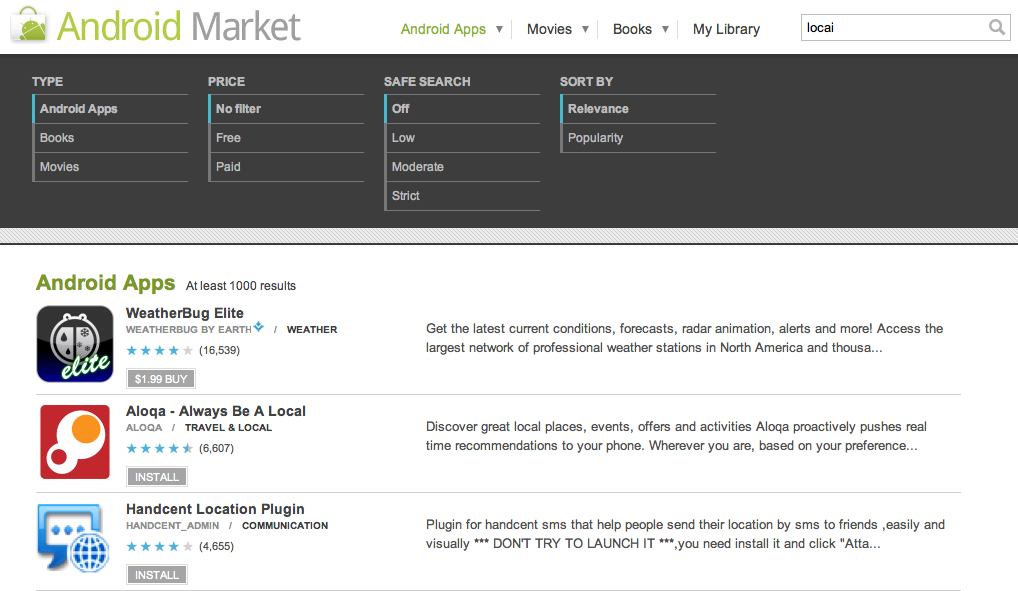 Search for “Locai” (with quotes):