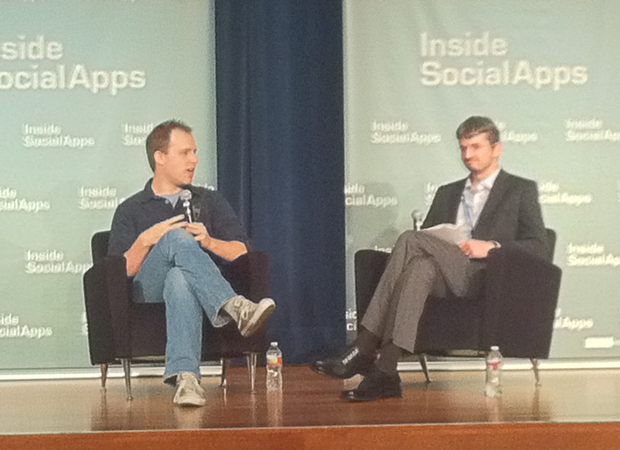 Here at Inside Mobile Apps conference, Facebook CTO Bret Taylor talked about how mobile will be Facebook’s primary focus in 2011, mainly because “mobile devices are inherently social,” he said. Currently Facebook has 1/3 of its almost 600M user base (200M) on mobile devices and Taylor says that Facebook mobile users are 2x as active as Facebook web users.

Taylor thinks of Facebook as a horizontal platform i.e. easily accessible. One big goal for Facebook is reducing friction on mobile and extending Facebook engagement to all devices, and Taylor brought up the PS3, the iPhone and customized devices (but conspicuously not the iPad) as examples.

As an example of a frictionless solution on mobile, Taylor brought up Facebook Single Sign On and mentioned that social movie site Flixster had a 300% increase in usage after it implemented the feature.

As Facebook has already seen with Facebook Places, Taylor emphasized that the convergence of mobile, local and social is the most interesting locus of growth in the space and a trend to watch as it deeply integrates real life with the social graph.

Facebook, which has the extreme competitive advantage of this social graph, is reportedly working on its own foray into to mobile, as a “social layer” on already existing hardware. “Social as a core part of product will have as great an influence on other verticals as it has on gaming,” Taylor said.