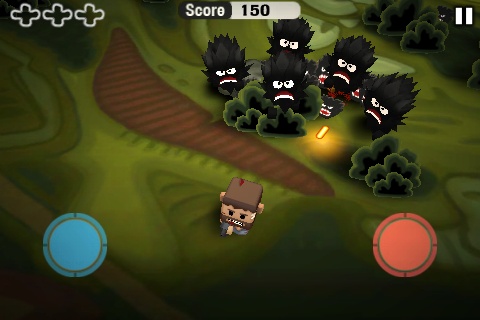 Developed by Mountain Sheep, Minigore was probably the most-hyped $1 iPhone game I’ve seen all summer. Unfortunately, when you hype a game as much as Chillingo did, it comes with a set of expectations. Though Minigore is a mildly entertaining survival shooter, it didn’t entirely hold up to said expectations. The game is simple: you are John Gore and your job is to survive as you are attacked by an endless blitzkrieg of furry enemies. These furry enemies are large square-shaped beasts of varying sizes that charge at you, trying to turn you into lunch meat. You, John Gore, have a machine gun and you rack up points by killing these nasty little critters.

Note: Play this game on EXPERT mode (toggle it in the options menu). It is WAY too slow if you play it on the Normal difficulty.

The game is as simple as it sounds. There are two touch joysticks on-screen: the left one is to move and the right one is to aim and fire your machine gun. Blast away, my friend, because there is no ammo limit and kick-back on the gun. The controls work beautifully and are definitely the game’s strong suit. It is easy enough to aim at the blasted varmint coming to attack you; similarly, running around to avoid the enemies is equally as smooth. Survival is the name of the game: you don’t ever win, per se, but you try to beat your high score by lasting longer than your previous tries. 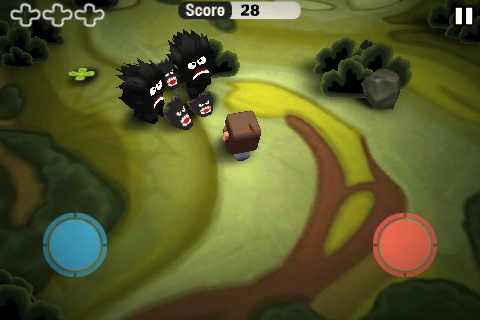 Where the game falls short is in its lack of depth. I know I harp on this a lot, but it’s important. There is only one level (mind you, it is hardly a “level”: just a landscape on which you can run free and fire away at the enemy) and all you do is run around shooting down furry creatures. The purported “depth” comes in two ways. First, the creatures vary in size. They all look the same, but they go from being tiny (one-shot kills) to being ginormous. The big ones break up into smaller ones as you continue to stick ’em with bullets. Second, John Gore can get upgrades. The shotgun upgrade absolutely sucks: I prefer the machine gun to the shotgun. The second upgrade makes John Gore blow up into a raving giant. Rabid John Gore can then run over the enemies instead of shooting at them, and basically destroys everything in his path. Neither of these add that much depth: creatures varying in size is a bare minimum to make the game interesting, and the upgrades simply don’t add a whole lot to the gameplay.

That said, the game has enough pluses: if you’re sick of playing the various $1 games you’ve already got, I would definitely take a look. It is mildly addictive, and a good pick-up-and-play game. It’ll probably last about 1-2 weeks in your pocket before you get bored. For $1, that’s not bad. The graphics are great: the game has a certain style that is playful yet classy, and the artwork is definitely top-notch. Furthermore, it seems like this game may go the way of Pocket God and provide constant updates which may extend the life of the game (and perhaps quell my concerns about depth).

As it stands, I can’t endorse this as a must-have on the iPhone, but it does come at a great price (don’t all iPhone apps?) and the promise of updates is definitely enticing. A quick look at the Minigore blog indicates that many big updates are coming up soon, including bluetooth multiplayer co-op. More importantly, perhaps, Minigore is just a prequel to Hardgore, which looks to offer a helluva lot more. If as we suspect, Hardgore utilizes the same controls and graphics as Minigore, and provides deeper gameplay, we’ll be stoked to see how it turns out…