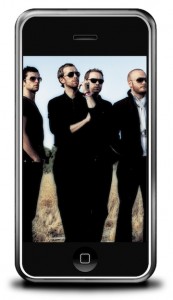 Details are a bit sparse for now, but we’ve now heard from multiple sources that Tapulous plans to release a version of their popular iPhone music game, Tap Tap Revenge, themed around British alt-rock band Coldplay early next week. This isn’t the first time the company has partnered with a band for premium releases; December of 2008 saw the Weezer-branded “Christmas with Weezer” edition, and an NIN edition was released last September.

The application has been submitted to the app store, and will likely see a release on Monday night or Tuesday morning. No whispers of pricing just yet. Both the Weezer and Nine Inch Nails releases went for $4.99 at the time of their release, though the Weezer edition has since dropped to $1.99 (presumably due to its Christmas theme being a bit less relevant now). As such, it is quite likely the Coldplay edition will launch for around 5 dollars.

As for content, we’re told that it’ll be made primarily of their recent popular stuff, though we’re also told that it will feature at least one remix from outside of their standard discography.

Once the iPhone 3.0 update has been released to the masses, these stand-alone artist-specific releases will no longer be necessary, as the SDK now supports premium content add-ons. However, premium content sales are only available for applications that were not free to begin with; might Tapulous release a be all, end all premium version to encapsulate its catalog of licensed content?

We will update this story if more details come in.