Last week, Netflix launched its debut lineup of mobile games to Android users globally. Today, the games are expanding to users on iOS. The lineup, which includes two “Stranger Things” games and a few other casual gaming titles, will be delivered to iOS users the same way they are on Android. That is, they’re not streamed from the cloud, but actually installed to users’ phones or tablets directly from the App Store.

With the Android launch, Netflix introduced a new “Games” tab within the app where users could browse the catalog and find a game they wanted to play. But to actually play the game, they would be directed to the Google Play Store to install the game on their device. Upon first launch, users would then sign into the game with their Netflix credentials.

Netflix says it’s using a similar system with the launch of Netflix games on iPhone and iPad. Except now, users are directed to Apple’s App Store for the downloads, not Google Play. The games will also require users to authenticate with their Netflix membership information in order to begin playing.

The company believes this system is compliant with Apple’s App Store rules, which were modified last year to be more permissive around gaming apps.

Though updated in response to address the growing number of cloud gaming services, Apple’s policy indicates that developers are allowed to offer a centralized app that offers its subscribers access to a gaming catalog, so long as each title within that catalog has its own, dedicated App Store listing. Apple said this would allow it to review each gaming title separately. The system had actually been pioneered by the subscription-based gaming service GameClub as a way to offer a broader selection of classic gaming titles that were only playable by its members.

However, there is one difference between the iOS implementation of Netflix games and how the system works on Android.

Netflix users on Android have their own dedicated “Games” tab in the app’s navigation, but iOS users will not. Instead, iPhone members will only see a dedicated games row in the app where they can select any game to download. Meanwhile, iPad members will see the row (pinned to position 6) and will be able to access games from the Categories drop-down menu. 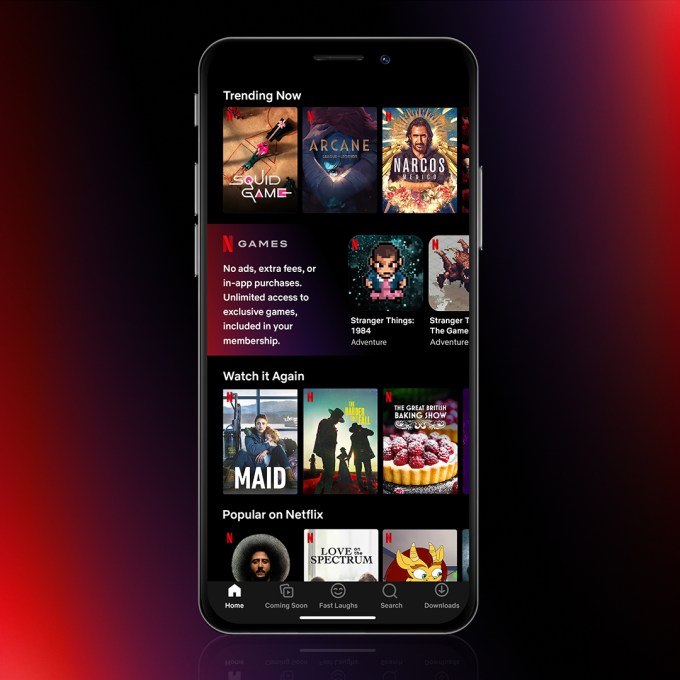 The company told TechCrunch that while Apple has been a great partner on Netflix games, it wasn’t entirely clear to Netflix if a gaming tab would bump up against another App Store policy, which bans apps that offer their own “app stores.” Since Netflix believes the tab is not critical to being able to offer the gaming experience to iOS users, it made the decision to launch without it. However, if the company is able to get more clarity around this rule in the future, it may be able to add a Games tab to its iOS app like the one available now on Android.

Longer-term, Netflix has plans to expand this catalog with other additions and gaming genres. For example, the company in September acquired the independent game developer Night School Studio, best known for narrative-driven titles like “Oxenfree,” to further build out its library of Netflix games.

Netflix explained its interest in gaming as just another way to entertain and retain subscribers — not a way to generate direct revenues from the games themselves. At present, the games are free to download, free from ads, and don’t include any in-app purchases. The company has said that as its catalog grows, it could apply its same recommendation algorithms to suggest new games to mobile users, instead of just TV shows and movies.

“We view gaming as another content category for us, similar to our expansion into original films, animation, and unscripted TV,” Netflix’s Q2 2021 shareholder letter stated, adding that the company’s initial focus would be on free games designed for mobile devices. “Since we are nearly a decade into our push into original programming, we think the time is right to learn more about how our members value games,” Netflix said.