Spotify this morning announced a new partnership with e-commerce platform provider Shopify that will allow artists on its service to connect their Spotify profiles with their Shopify stores, allowing them to market their merchandise directly to fans through the Spotify app. After connecting their Spotify for Artists accounts with their Shopify online store, artists will be able to sync their product catalog to Spotify to showcase whichever products they choose on their profile in the streaming music app.

From there, fans will be able to browse the products and make purchases. In addition to enabling easier access to artists’ existing Shopify stores, the integration could offer an additional revenue stream for artists that had not yet established a merchandise website, and could give those who already have a website elsewhere a reason to switch to Shopify’s platform.

Shopify says it already powers the websites for thousands of artists who are expanding their businesses beyond music alone to build “fully realized” brands.

“Artists today are entrepreneurial. They’re building multifaceted brands and businesses, and now we’re making it easier for them to meet fans where they are,” said Amir Kabbara, Shopify’s director of Product, in a statement. “By bringing entrepreneurship to Spotify, we’re empowering artists to think beyond the traditional merch table with new ways to monetize, and to experiment with their brands through commerce.” 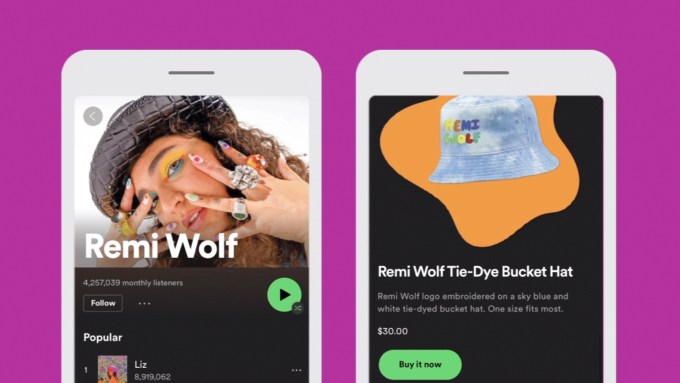 Shopify also says its larger app ecosystem could help artists enable new services, as well, like print-on-demand or product discovery tools. And Shopify’s infrastructure is able to manage high volumes of traffic for artists with large followings who may send surges at times — like when they drop new products, for example, Shopify added.

While the Shopify partnership is significant, it’s not the first time Spotify has teamed up with another company to give artists the ability to market their merchandise through its app. The company, for many years, has offered artist profile integrations with other merchandise service providers. Currently, this includes a deal with Merchbar, but in previous years, BandPage and Topspin have been partnered.

With Merchbar, artists can select three products to showcase on their profile. Now artists using Shopify can do the same.

To get started, artists will first log in to their Spotify for Artists dashboard on desktop, then go to the “Profile” tab, and click “Merch.” From there, they will pick the three items from their Shopify store to feature on their profile. At present, artists are only able to connect one Shopify store per artist.

To encourage sign-ups, Shopify is offering a 90-day free trial to all Spotify artists signing up for the first time.

However, the feature is currently in “beta,” Spotify says. While all artists globally can link their Shopify stores, the merch will only appear to listeners in Australia, Canada, New Zealand, the U.K. and the U.S. for the time being. 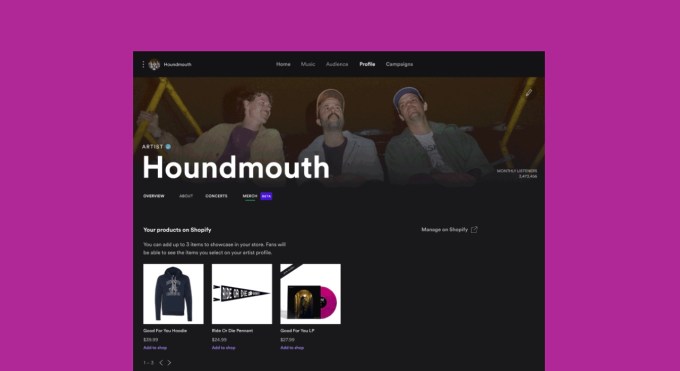 Both Shopify and Spotify have similar interests in enabling the new creator economy, though with different focus areas. Shopify sees its e-commerce platform as a complement to creator businesses of all kinds, while Spotify’s interest is more on artists (and now, podcast creators, too). In the past, Spotify has rolled out a number of other tools in the creator space, including those for ticketing, tipping and Fans First emails, to help artists grow their larger businesses.

Earlier this year, both companies’ CEOs — Spotify CEO Daniel Ek, and Shopify CEO Tobi Lütke — participated in a Clubhouse session where they talked about the many ways creators today were diversifying their monetization strategies.

At the time, Ek hinted toward the possibilities of working more closely with Shopify, when he noted how many artists were already using its platform.

“Almost every successful creator now is omni-talented and omnichannel,” he said at the time. “That means that they are on YouTube putting up videos. They are on Instagram. They are perhaps putting together brands and putting it on Shopify, but they’re also putting out music and merchandise on Shopify and music on Spotify, of course, and touring. And so they’re really just doing a multitude of different things and connecting with their fan bases across many different platforms,” Ek said.