The jury is still out on what might become the most viable business models for augmented reality technology, but in the meantime a startup out of the U.K. is betting one big area will be in vehicles, in the form of holographic displays. And today it is announcing a significant round of funding from strategic investors to fill out its vision (so to speak).

Envisics, which brings together technologies like computer vision, machine learning, big data analytics and navigation to build hardware that integrates into vehicles to project holographic, head-up displays providing enhanced “dashboards” of information to drivers — with features like mapping, navigation guidance and hazard warnings — is today announcing that it has raised $50 million in a Series B round of funding. Dr. Jamieson Christmas, the founder of the company, said in an interview that the funding is being made at a valuation of over $250 million, “significantly up” on its previous round, although Envisics, based in the town of Milton Keynes in England, has never disclosed its valuation before.

The capital is coming from a strong group of strategic investors that points to the companies that are already working with the startup: Hyundai Mobis, General Motors Ventures, SAIC Motors and Van Tuyl Companies (the family office of the Van Tuyl Group, which made a fortune in automotive dealerships and related services) all participated in the round.

Envisics is already working with car companies to integrate its technology into vehicles. Initially, it’s focusing on the higher end of the market and integrating its tech into models from Jaguar Land Rover (owned by Tata Motors), Christmas said. Mass production of vehicles using its technology is slated for 2023.

At a time when AR startups have been on somewhat shaky ground, the funding is a validation not just for Envisics, but for the wider market in which it operates.

Christmas first got into holographic displays through his first startup, Two Trees, which eventually got acquired in 2016 by Daqri, an AR glasses company that was looking for more tech to better compete with Microsoft and its HoloLens.

Christmas said that while Daqri was focused on headsets, he still saw an opportunity to work on holographic tech for automakers (indeed, when it was acquired, Two Trees already had automotive customers).

That eventually led to Christmas, two years later in 2018, spinning out Envisics (once again as a U.K. startup, like his previous one) to focus just on the holographic automotive opportunity.

It turned out to be a very timely move: Daqri eventually shut down in September 2019 after failing to find its footing as a business and running out of money in what was already a challenging climate for AR. It was not the only one: other casualties at that time included patent and asset sales from the Osterhout Design Group and Meta.

If Envisics managed to jump off the burning platform that was AR headset displays, it arguably went from the frying pan into the fire (excuse the mixing of a few heated metaphors): billions of dollars have been invested into the automotive sector and its hot pursuit of what it hopes will be the next generation of transportation, autonomous vehicles.

Another high-flying, heavily funded AR headset startup is shutting down

Yet if you think AR has yet to find a landing place as a business, self-driving cars are even further from their destination. Experts agree that we are many years away still from fully autonomous vehicles capable of making decisions as reliably as humans, and some skeptics wonder if we’ll ever get there at all.

Enter technology like Envisics’. The company’s tools are not a replacement for human drivers, but they definitely enhance how a human can drive, and in the many steps that we’ll see between today and some future where cars can actually drive themselves, tech like Envisics’ will continue to play a vital and interesting role, one that you can imagine has lots of room to evolve along with the cars themselves. (For example, today it provides vital data; tomorrow it could also provide… useful diversions if you no longer have to do any driving?) 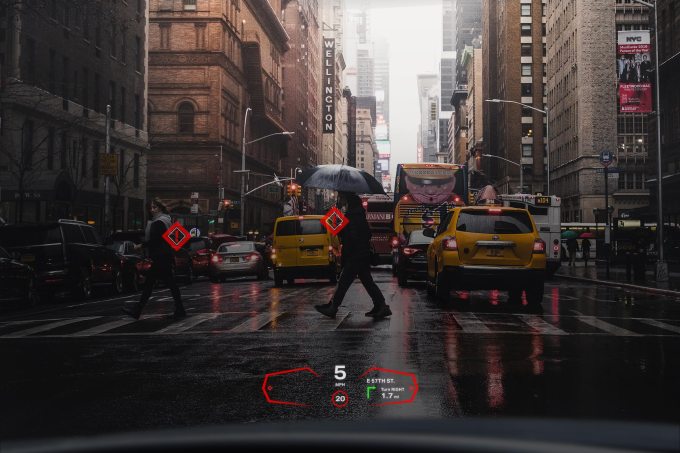 “GM is very impressed with Envisics’ holographic augmented reality-enhanced head-up display technology,” added Matt Tsien, president of GM Ventures. “This technology will help us revolutionize the in-vehicle experience with a variety of safe, highly integrated and intuitive applications, including applications that will enhance the hands-free driving experience in future EVs, like the Cadillac LYRIQ.”

“We are very excited to be part of Envisics journey to commercialize its revolutionary holographic technology and look forward to partnering with them to deploy advanced AR-HUDs in our next generation of cars for both the Chinese domestic and global markets,” said Michael Cohen, Investment Director at SAIC Capital, in his own statement.