Today after the bell, Lyft reported its second-quarter financial performance. The American ride-hailing company’s results helped illustrate just how much the economy has changed in the wake of COVID-19 and its resulting disruptions to life, travel and work.

Uber’s own results, which were shared last week, provided hints of what was coming for Lyft. The upshot: a sharply reduced ride-hailing business.

In the second quarter, Lyft reported revenue of $339.3 million and earnings per share of negative $1.41. Analysts had anticipated the company reporting revenues of $336.77 million, and a per-share loss of $0.99, according to Yahoo Finance averages.

In after-hours trading, the company’s shares are up more than 4%.

Notably, Lyft did improve its GAAP net loss compared to the year-ago period, though the company has stressed other profitability metrics in recent quarters. 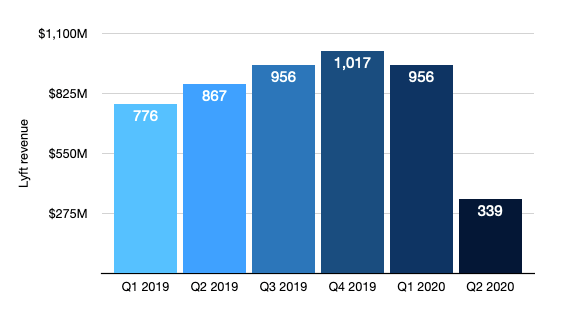 Kirsten and Alex’s great How To Chart adventure.

Why are Lyft shares higher in after-hours trading? Because investors knew that Lyft’s quarter was a write-off. What they were looking for instead was a return-to-form, and a note on how much cash the company had on hand at the end of the period. Up top, Lyft answered both questions, saying that it wrapped Q2 “with $2.8 billion of unrestricted cash, cash equivalents and short-term investments,” and that “monthly rideshare rides in July were up 78% compared to April.”

That’s enough for the company to get a jolt from the public markets, despite Lyft’s operating cash flow for the first two quarters of 2020 coming to a stunning -$958.6 million.

Before we close, some other bits and bobs that stood out while we were reading the report:

We’re keeping tabs on the company’s share price and digging into rider numbers. More to come.