The Surface Hub 2, the successor to Microsoft’s first set of giant Windows 10 touchscreen displays for collaboration, will launch in Q2 2019, the company announced today. Previously, the company had only said that it was targeting 2019 for the launch.

The company also today provided a roadmap beyond that, though. First, it will launch the Surface Hub 2S. The S is significantly lighter and slimmer than the original Surface Hub, yet offers the same kind of user experience. The display is a bit smaller, though, and there will only be a 50.5-inch display instead of the 55-inch and 84-inch version previously offered. It’ll also feature a 4K camera, improved microphones and support for Microsoft Teams.

What’s maybe most interesting, though, is that in 2020, Microsoft plans to update the Surface Hub family with the Surface Hub 2X. It’s this update that will bring a number of updates to the family that most users have been waiting for (and maybe hoped for from the 2S). The 2X will include the ability to rotate and tile the screen. It will also enable multiuser log in. 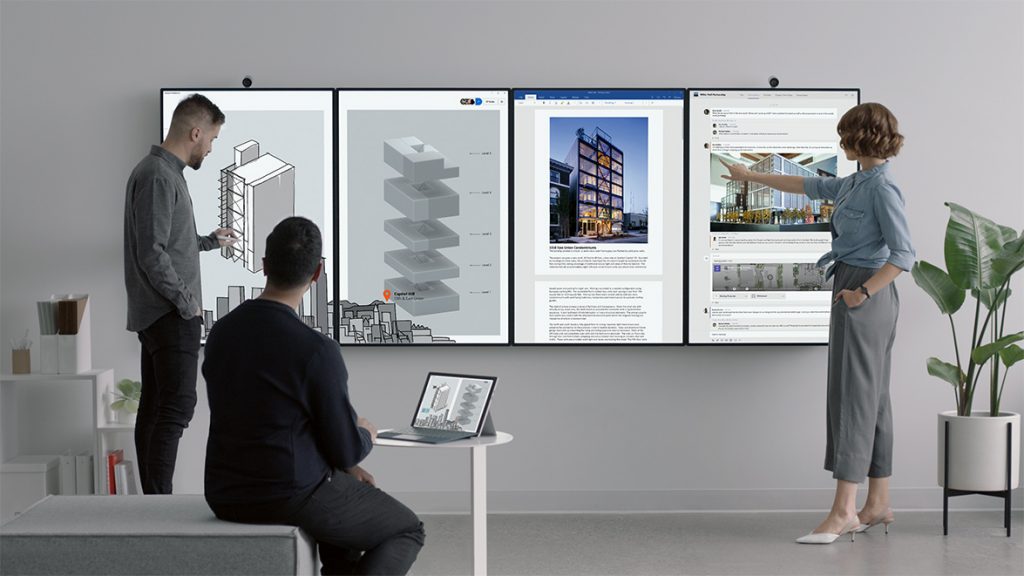 If you opt for the 2S for now (and if you had a few thousand dollars to spend on a collaborative digital whiteboard, why wouldn’t you?), then you can also make use of the new whiteboard app, use Bing to search (no word on whether you can choose search providers) and get all of the other benefits of the existing Surface Hub experience.

“As with all our devices, Surface Hub 2 was designed to give people a product that will help them create more, do more, and achieve more,” Microsoft says in today’s announcement. “With Surface Hub 2 we believe we have created an experience that not only people, but teams will love. Surface Hub 2 breaks down barriers between teammates and will help organizations around the world to elevate themselves with a more modern and collaborative culture.”

It’s worth noting that Microsoft got a bit of competition since it launched the first version of the Surface Hub. With its Jamboard, Google now offers a similar and somewhat more affordable experience, though if you are in the Microsoft and Office ecosystem, that won’t do you much good.