Amazon introduced 10 percent savings at Whole Foods for Prime members earlier this month, and today it kicked off a nationwide expansion of the initiative.

The Prime Whole Foods discount — one of a number of measures following Amazon’s acquisition of Whole Foods — covers savings on featured products each week and an incremental 10 percent saving on items that are already on sale, Amazon says that typically covers “hundreds” per store. Today, the program expanded to 12 more states, including northern California, Colorado and Texas, with more set to follow soon.

The collaboration is yet another reason to subscribe to Amazon Prime, and the compelling package for consumers gives retailers — both online and offline — further reason to fear Amazon.

The discount is also possible for customers who use the Whole Foods delivery service, which is also part of Amazon’s Now service in selected cities. Prime members get free delivery if their order is $35 or more, and there’s a two-hour delivery window. 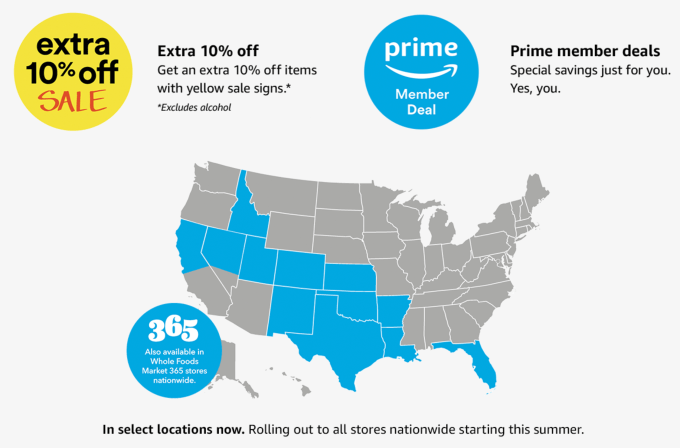 “From delicious dinner options like shrimp or rotisserie chicken to fresh organic raspberries, we’re offering savings on products customers love and can enjoy with their families. Exclusive deals like the sustainably caught halibut were a huge hit in Florida, and we’re excited to partner with our suppliers to bring Prime members even more discounts on seasonal favorites and everyday staples,” A.C. Gallo, Whole Foods Market president and COO, said in a statement.