Memebox, an e-commerce company specializing in beauty products from Korea, has closed a significant $65.95 million Series C funding round to fuel further expansion.

The financing was led by new investor Formation Group, with participation from returning backers Goodwater Capital and Pejman Mar Ventures. The deal takes Memebox, which graduated Y Combinator in 2014, to $95 million from investors to date. Its $17.5 million Series B round closed in March 2015.

Memebox began as a beauty box company when it was started by founder and CEO Dino Ha in 2012. It pivoted to a direct-to-consumer e-commerce model when the curated box model, pioneered by the likes of BirchBox, began to fade.

Today, the company has dedicated sales in Korea, China and the U.S. with a global service for other countries. Its staff of nearly 250 are spread across offices in San Francisco, Shanghai, Seoul, Taipei, Hong Kong and Singapore — beauty boxes account for just one or two percent of its business, Memebox said.

Arnold Hur, president of Memebox U.S., told TechCrunch in an interview that the company’s total GMV — the volume of transactions on its platform — is at a $150 million annual run rate, with 280 percent annual growth.

Global demand for Korean products is booming, fueled by K-Pop and Korean dramas, and not just among Asian consumers.

Korea is Memebox’s home turf and its largest single market for sales, but the U.S. and China together now account for more revenue than Korea. And they are growing fast. Former googler Hur said Memebox’s China business increased 1,200 percent year-on-year, while it grew 490 percent annually in the U.S..

“Korea will remain the hub, but have been able to drive really great global growth,” Hur, who was head of growth at Memebox prior to his current position, reflected. 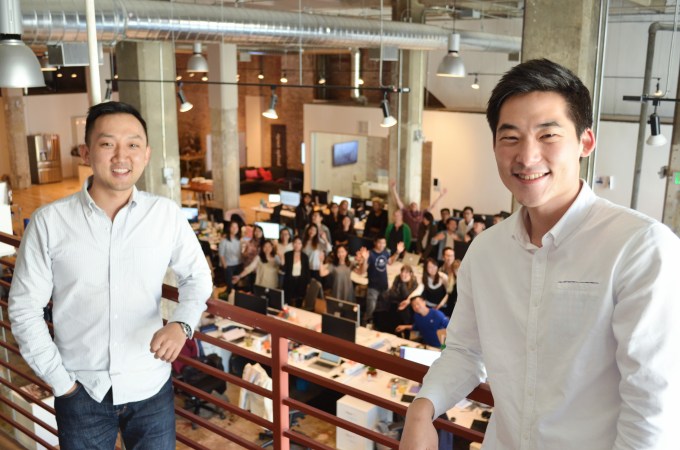 Memebox specializes in Korean beauty brands — it currently sells over 1,200 products from the country, many of which were introduced to the U.S. and China via its platform first. But what’s particularly interesting is the way that the company itself is stepping up to fill product “gaps” that it sees among its catalogue with its own brand products.

Hur explained it with a comparison to Netflix’s original programming.

“It’s the same way that Netflix knows political dramas are popular and Kevin Spacey is a big name actor,” he said. “They put it together and make a good new show. So, too, we can use data to understand what customers want [and] identify trends and gaps.”

Products like an own brand pure aloe face mask can complement regular retail offerings — most of which are cotton-based — and also cost as much as one-quarter of the price. Then there’s the product-to-market speed. Memebox claimed it can introduce new products within a few months of concept, slashing the traditional product cycle timeframe, which can take 18-24 months. A lot of that is down to the regulation collection and analysis of data on customers and preferences, which means the lengthy process of studying reports, trend and holding focus groups are not necessary.

Then there are the significant financial benefits.

The income from its own brand products — which include 450 products across four different brands — are actually higher than general sales on Memebox, Hur indicated.

“We see more net revenue from our [own] brands than our e-commerce platform,” he said. “That’s pretty crazy given that the brands have only been alive for a year.”

Despite a focus on product, Hur said that Memebox doesn’t intend to compete directly with the brands it sells. Indeed, it is seeking to bring more established brands to its platform as well as adding two more of its own brands to its collection before the end of the year. 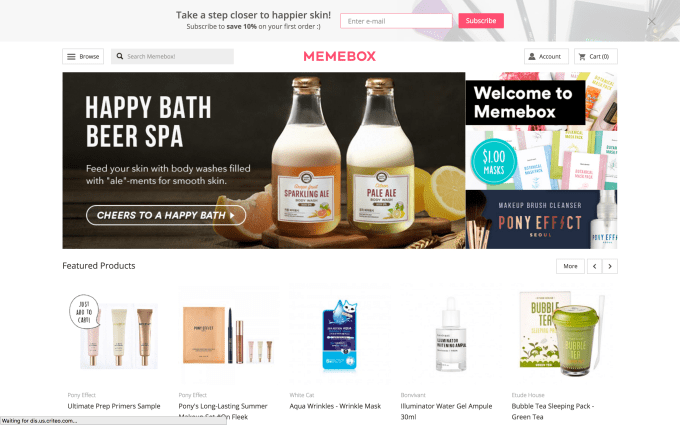 Online is a huge gateway to customers — and Memebox boasts some hugely impressive stats: four million app downloads, 80 percent of sales from mobile, its run rate — but it is also working offline, too.

It recently opened its first brick and mortar store in Seoul, and Hur said that it will be the first of many worldwide, although there’s no specific timeframe for other stores at this point.

“Offline helps us reach a new set of customers and it provides more data points for us,” he explained. “For example: how [customers] react to different packaging or shelving arrangements. Offline is part of delivering a complete experience.” 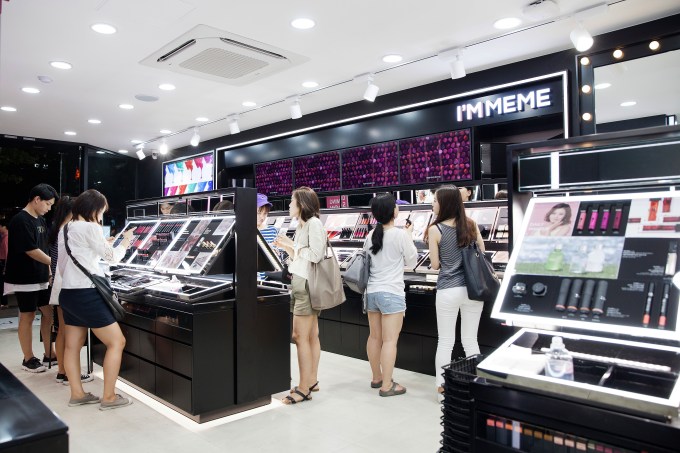 On that note, Hur said that the driving ideology behind Memebox is to build the kind of company that L’Oreal would be if it were born in the digital area.

Being digital is certainly something the company has embraced. Aside from from building a large audience on social media — it claims its 70 million-plus Facebook video views so far this year are “more than L’Oreal, Benefit Cosmetics and H&M have combined in Asia and the U.S.” — the company works with leading beauty YouTubers and bloggers, has launched products with beauty influencers, and reached the point that half of its traffic comes from 18-24 year olds — that difficult-to-reach, much-desired consumer demographic.

“There’s a consumer product revolution — “CPR” — which is really breathing new life into commerce,” Hur said. “New brands are being built online and that’s a radically different thing, especially for the beauty industry. Our edge [over traditional beauty companies] is thinking how would a company be built differently if it were created today.”

For all its progress, though, Memebox isn’t profitable yet.

“We’re aiming to be profitable by next year [and are] making good progress towards that,” Hur said.

He wouldn’t comment on whether the company might eventually seek an IPO or whether it sees itself as an acquisition target given the recent consolidation, which includes Walmart’s $3 billion acquisition of Jet.com and Unilever’s purchase of Dollar Shave Club for $1 billion.

What’s more certain is that Memebox is one to watch.