Launching out of the latest YC class, Ironclad is an automated service to help companies draft, organize and execute common legal paperwork.

Expensive legal bills are often an unwelcome reality for young startups. Lawyers charge hundreds of dollars an hour, but are often a company’s only option for correctly preparing things like financial documents and sales contracts.

Here’s how Ironclad works: When a company first signs up, the service creates a shared Dropbox folder that will house and organize all of your company’s legal docs.

When a founder needs a document like an NDA or sales agreement prepared, they head to Ironclad’s site, pick a document type and input basic information about both parties. Ironclad will then create a draft document and file it away inside the company’s Dropbox. 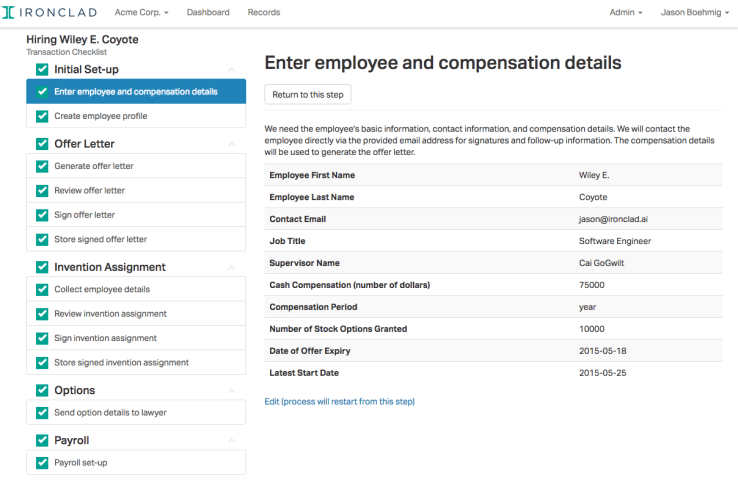 After being approved, Ironclad will then send out the document via HelloSign for both parties to execute.

Jason Boehmig, Co-founder of Ironclad, explained that current methods to draft and execute legal documents are extremely fragmented. For example, a startup trying to complete a sales agreement would have to separately move documents between their lawyers, document storage solutions, and e-signature companies.

With Ironclad, this entire process is automated, which lets companies save a bunch of time and money.

Notably, Ironclad isn’t out to replace lawyers. In fact, Boehmig explained that the company’s goal is to become an operational layer for lawyers, essentially consolidating their workflow and giving them superpowers.

This is supported by the fact that while Ironclad will provide users with templates of common legal documents, the service also has a plan that lets companies import documents from their own lawyer.

Ironclad currently has 200 companies in beta, and provides a free tier where users can create and execute NDAs. They will also charge $49/month for access to additional documents like sales and contractor agreements, or $199/month for the ability to import custom templates.

The company also provides an enterprise option, which is tailored to law firms and in-house legal departments.

Boehmig told TechCrunch that in the future, the company hopes to provide just about any legal document that a startup would need, from the time it is founded up until it raises a Series A.