Reserve Strap just announced the final details for its Apple Watch battery band, which it claims will add an additional 30 hours of battery life to the device. The Reserve Strap will ship at the beginning of November and will cost a pretty staggering $249.99. 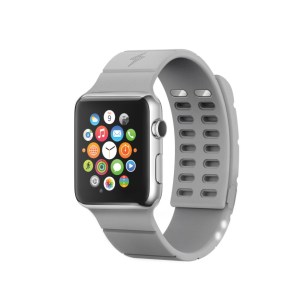 The “Specialized Thermoset Elastometer Silicon band” (lol) will boast the same water resistance as the Apple Watch, and will be available in white, grey and black models. Both sizes of straps for the 38mm and 42mm Watch will increase the device’s total battery life to “48 hours of functionality.”

The Reserve Strap is the first battery band to be made available for the Apple Watch and addresses key concerns with battery life that a number of users have raised regarding the device, namely its inability to make it through more than a day on a single charge.

The Reserve Strap is in full compliance with Apple’s Band Design Guidelines and won’t violate your AppleCare warranty. The Reserve Strap makes use of the Apple Watch’s hidden diagnostic port to enable seamless charging of both watch and band, though unfortunately in order to charge both at the same time you have to do so through the Micro USB port on the band rather than using the Watch’s magnetic charger.

Though Apple surprised users by announcing their open support for third-party bands, they have yet to respond to device makers like Reserve Strap who are utilizing the Apple Watch’s hidden diagnostic port, and it has not been specifically condoned in their design guidelines.

For what it does, the Reserve Strap definitely seems like a huge chunk of change, but for significantly extending the battery life of a device that can cost upwards of $10,000, it may be worth the premium for some users.