An online service called Forget.me, launched last week to quickly capitalize on a European court ruling from late May that requires Google to process requests by private individuals to de-index outdated or irrelevant personal information, has put out some early data on the kind of requests individual Europeans are submitting via its (for now) free service.

Forget.me promises to hand-hold submitters through the process of asking Google to remove something about them, and keep them updated of the progress of their so-called ‘right to be forgotten‘ (rtbf) request. You don’t have to use a third-party service — Google accepts requests directly (here) but Forget.me claims it makes the process quicker and easier. It’s actually a business extension of another startup, Reputation VIP, which works in the online reputation management space.

Setting aside the irony of private individuals engaging a third-party company to take a very close interest in pieces of personal data they don’t want anyone else to know about (Forget.me’s privacy policy stretches to two lines: “Respect of your privacy is of the highest importance for Forget.me. We undertake to respect the confidentiality of any information you provide to us.” can be found in full here), the results make for interesting reading.

Perhaps most interesting is the fact that Forget.me is getting by far and away the largest proportion of its traffic from the U.S. — even though the ECJ ruling applies only in Europe. Doh… Indeed, Google is not required to de-index any information on Google.com, only — in the cases of successful requests — on searches conducted via its local products within the European Union (and a handful of regional non-EU countries).

However it’s not been entirely clear whether US citizens could request data about them be de-index by Google in Europe — which may explain some of the U.S. interest. Web traffic skewing to the US for certain keywords  may also be part of the explanation. It’s also possible there is an appetite for removing personal information from Google in the US — especially given that Europeans do now have an official channel to make requests.

Forget.me’s FAQ notes that the European rtbf law only applies to those physically residing in Europe, so, presumably, a U.S.citizen temporarily residing in Europe could make a request under the law — although an EU citizen living in another part of the world could not.

Forget.me said a third (33%) of its digital visitors in the first week of operation came from the U.S. The next largest single geographical group was France, with 7% of visitors (worth noting it is a French startup); followed by Germany and the U.K. (tied on 6% apiece). 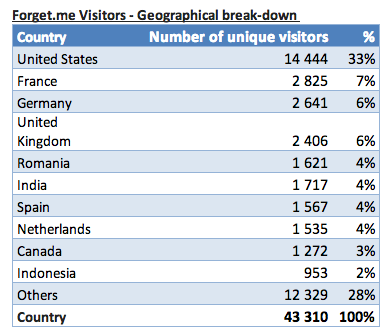 In total, since launching on June 24, Forget.me said its website has had more than 43,000 unique visitors, from 183 countries. While some 13,000 people registered on the site, which, at just under a third of total uniques, is not a bad registration rate.

Of those who have registered, 1,106 have submitted right to be forgotten applications so far, requesting the removal of a total of 5,218 links.

Forget.me has further broken down these early requests into some broad-brush categories — with the most popular motivation for a rtbf request being “invasion of privacy”, making up 28% of submissions. The next most popular category was “defamation and insult” (19%), according to Forget.me’s data.

There is then a big drop to the next most popular category: “misused identity” (6%).

The full list of categories also includes other currently even less popular categories, including criminal procedure, presumption of innocence and images. 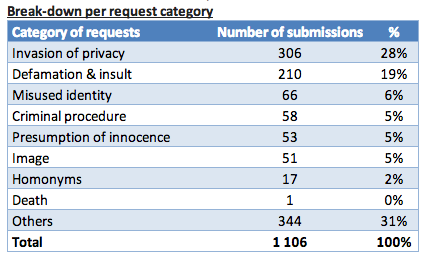 For the two most popular categories for rtbf requests, Forget.me provides a further breakdown. Within the invasion of privacy category the most popular reason for private individuals to request information about them be de-indexed from Google is the disclosure of their home address — making up around a fifth (22%) of these requests.

This is followed (making up 18%) by negative opinions attached to an individual, such as if their name is mentioned on a forum critical of their workplace for example. In third place it’s redundancy (16%).

The full breakdown of the invasion of privacy category is as follows: 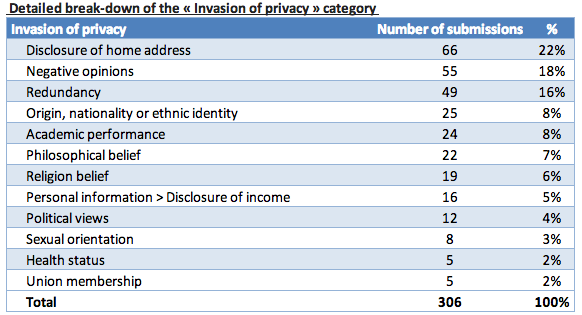 Forget.me has also provided more detail about the make up of the defamation and insult category — which shows that the largest motivator here (43%) is individuals worried about their name being erroneously attached to matters that are completely extraneous to them.

In terms of which country is leading on rtbf requests at this early stage, the UK tops the chart, followed closely by France and then Germany. The top 10 countries for requests so far are listed in this table: 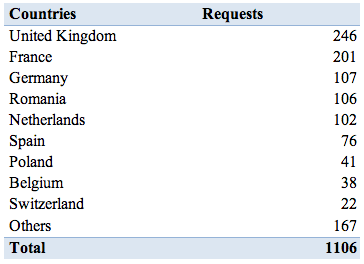 Google professed itself shocked at the ECJ ruling late last month, although the related data protection legislation dates back to 1995. The reason for the sudden enforcement was a referral from a Spanish court when a private individual had requested information about a property foreclosure be removed from Google.

The ECJ ruled that Google is a data controller — being as is orders and lists information — and should therefore be subject to the legislation.

In the immediate aftermath of the court ruling, information about the sorts of early requests Google was receiving emerged which carried the distinct scent of a controlled leak — being as pedophiles, dodgy politicians and bad doctors were identified as apparent rtbf requesters.

Google then subsequently publicly revealed a breakdown of requests in an interview with the FT two weeks after the ruling. Then Google said 31% of requests it had received related to fraud/scam; 20% to arrests/convictions for violent or serious crime; 12% to child pornography arrests; 5% to government or the police; and 2% to celebrities.

So, either the balance of requests has shifted around a month after the original ruling. Or the people using the Forget.me service are different to those making requests direct via Google. Or indeed both interested parties are spinning the data to their own ends.

Let’s not forget that Forget.me is aiming to make money off this ruling, so has a vested interest in the new European world order here — even as Google continues to lobby hard against it.

No one is without a wider economic agenda, except perhaps the private individuals submitting requests to Google — who just have their own individual and very personal agendas.