Netflix today released its first-quarter financial results, with the company beating analyst expectations. For the first three months of the year, the company reported earnings of 86 cents per share on revenues of $1.27 billion.

Earnings were above analyst expectations of 83 cents a share, while revenues were in-line with the $1.27 billion Wall Street forecast for the quarter. In last year’s first quarter, Netflix earned 5 cents a share on $1 billion in revenue.

On the international front, Netflix said that it ultimately expects non-U.S. subscribers to surpass those in its home market at some point. Today, international accounts for 25 percent of its streaming revenues. The company also said that the international business is on pace to achieve profitability, but that its plans to expand will keep that segment at a loss for the time being.

Netflix growth has remained steady as the company continues to add new original series, while also releasing new seasons of series its viewers already know and love. In the first quarter, that meant the release of second season of Emmy-winning series House Of Cards, which was the first of its originals to be announced.

At the same time, Netflix has been working to improve its quality of service from a technical perspective. It recently added 4K video streams for some titles, for instance.

The most significant move, however, was a deal it struck with Comcast that enables a direct connection between the two at the transit layer and cuts out third-party middle men. While the deal wasn’t expected to impact the company’s earnings, it did cause streaming speeds to improve by 65 percent after the connection was in place. 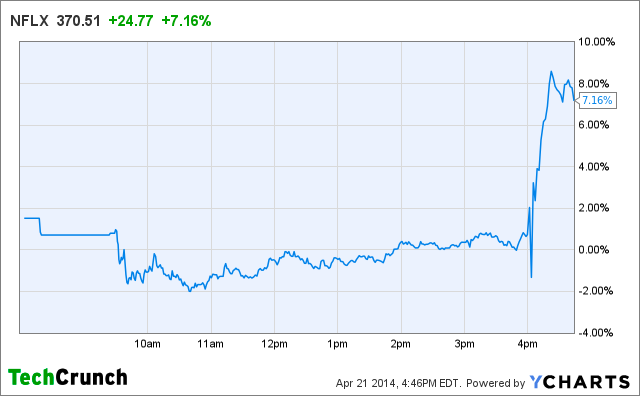