If your aim is to be an enterprise messaging app to help cut down on the (over) use of something as ubiquitous as email, then it probably follows that you will need to be available on as many platforms as possible. Fleep, built by an impressive Estonian team comprising a number of ex-Skype engineers, is aiming to do just that. But when the app launched back in August of last year it consisted of an iOS app and web version only. Today, however, the startup is adding Android, Mac and Windows to the list of supported platforms for its team-messaging app.

The company is also disclosing €360,000 in new funding — an extension of its original €260,000 seed round — from angel investors Jaan Tallinn, Ahti Heinla, Priit Kasesalu, Sten Tamkivi, and Rocksprings. Tallinn and Kasesalu are previous backers of Fleep, and, along with Heinla, are also ex-Skypers. Add to this the ex-Skype engineers who make up four out of six of the startup’s founders and it really doesn’t get any more ‘Skype mafia’ than this.

Designed to bridge the gap between ‘reply all’-style group email and enterprise messaging/IM services — the latter, such as Yammer, HipChat, Convo, and Campfire (and to some extent Skype itself) can also be considered competitors — the app works as follows: 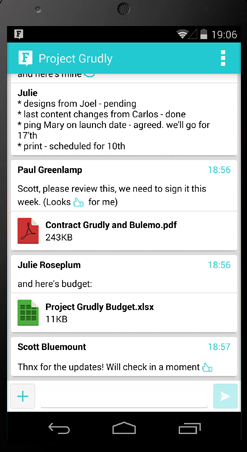 To start a new conversation, you click on the ‘create new’ button and enter the names of those who you want to see become part of the conversation. If they aren’t already using the app, you can enter their email address instead where they’ll be able to interface with the conversation via email in the usual old-skool way, by hitting reply, although in this instance their contribution also gets pulled into Fleep. In other words, not all participants need to be using the app. In fact it’s the way Fleep is designed to shun the walled-garden approach traditionally favoured by the enterprise, enabling participants to be added ad-hoc on a conversation-by-conversation basis — just like email — that sets it apart from many if its competitors.

In addition, conversations are threaded, each can have a title, and are fully searchable. Other features, for what is purposely a very streamlined app, include a way to bookmark (or ‘pin’) a message in the form of an editable note, making for a very lightweight way of extracting important or actionable information, and the ability to browse images or other attachments via a separate files tab so that it’s quick to retrieve an important asset.

Fleep isn’t disclosing user numbers, except to say that in its first six months the app has attracted “thousands” of beta users — so it’s still early days. Interestingly but not surprising, the majority of those users have come via the startup community, for which a lightweight and flexible app like Fleep seems well-suited. However, one larger client win so far has been Glimstedt, a 250-person international law firm, whom I’m told have made ‘Fleep chats’ an item in their timesheets.

It’s expected that multi-platform support will spur the app’s further growth, since early feedback demanded more ubiquity. “Many teams whom we spoke to told us they need desktop and Android apps to take Fleep into everyday use,” the startup’s co-founder and CEO Henn Ruukel told me in a Fleep chat.

In a BYOD era, “it’s quite rare to have an all-iPhone team, usually its a mix,” he adds.

The company is also keeping an eye on Windows Phone, but has “no plans there yet.”