The photo-sharing juggernaut rumbles on. Dubble, a photo-sharing iOS app that launched last October, has expanded its feature-set to beef up the social networking side. Its Dubble’s largest update since launch.

Specifically, the v1.2 update adds the ability for Dubble users to like and comment on each others’ shots, and add other users as favourites so they see their activity in a new notification section.

So far so standard for a photo-sharing app hoping to build community.

But Dubble’s twist is what the app does to users’ photos: it randomly combines two photos from different users, by overlaying one shot over the other, to create a composite digital double exposure. The result is designed to mimic the double exposure effect that’s possible on film photography.

It also serendipitously mashes up otherwise unconnected users of the app — as a sort of social accelerant. But whether having your latest selfie combined with a photo of a random stranger’s cat is enough to get you talking remains to be seen.

It is still iOS only, though. And the app itself has been on the lean side, features wise, with the startup taking a minimum viable product approach for launch. Today’s beefing up of its social smarts starts to flesh out Dubble’s offering. An Android app is also planned — likely coming this summer.

Scott says Dubble is in the process of “closing in on” a tranche of external funding to speed up development of the Android app — with a timeframe of July/August pegged for launch. It’s looking for funding in the region of £300,000 to £400,000 to get through its next phase of development.

The U.K.-based startup has got this far with funding from friends and family, to the tune of around £100K.

Elsewhere in the v1.2 update, there are user interface changes — with images now displayed full width, and various shortcuts incorporated for getting to the Dubble stream, notifications and the phone’s camera roll (where users can snag more source material, if they don’t want to snap something immediately).

Double tapping on any Dubble also likes it (there’s a like button too), while holding down on an image opens it up in zoom mode. When commenting, Dubble users can also now @mention any other users so they also get notified of the comment (as well as the photo owners). 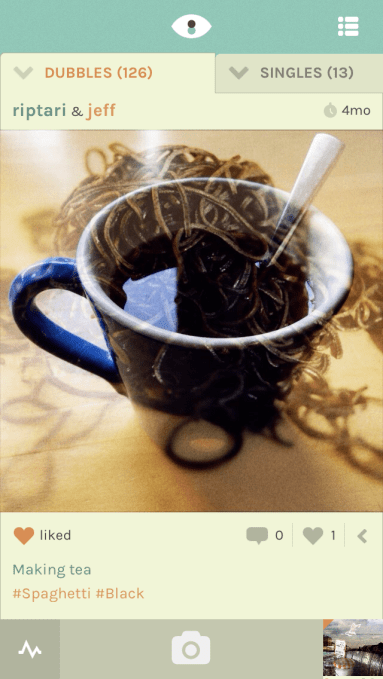