In an unexpected move, six of the largest hotel companies in the world have partnered to launch a hotel search engine of their own, dubbed Roomkey.com. The hotel companies hope that offering a ‘personalized experience’ and ‘accurate information’ will make travelers choose for them when they search for accommodation.

Choice Hotels International, Hilton Worldwide, Hyatt Hotels Corporation, InterContinental Hotels Group, Marriott International and Wyndham Hotel Group teamed up to start Roomkey.com to, in their own words, “provide travelers a search and book experience tailored for ease of hotel shopping through an uncluttered and trustworthy site”.

Roomkey.com users can look for and book properties at all – but only those – six hotel chains involved, including their affiliates. Later on, the hotel companies say, the site will also offer independent reviews, and the ability to compare, plan and share with friends and family.

The site is not just limited in scope, but also up against a plethora of hotel search websites and aggregators, so it remains to be seen if it will get any traction. For now, it’s focused on serving travelers in the United States, but it should be expanded to include other English-speaking regions soon.

Interestingly, Roomkey.com says it acquired its technology platform from hotelicopter in an asset deal that closed in 2011. We covered hotelicopter when it debuted back in April 2009.

Terms of the acquisition were not disclosed, but it was likely small in size.

More background information about the deal is available on industry news site Tnooz. 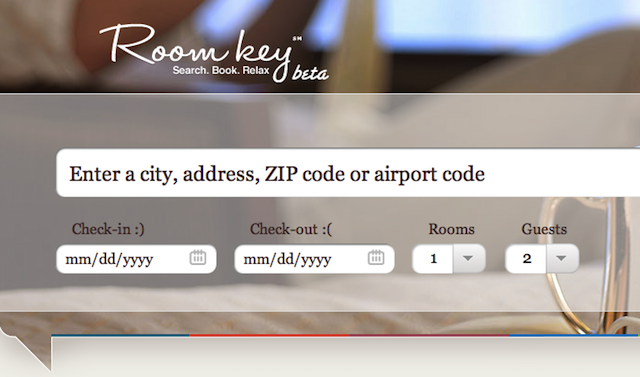