The Samsung Focus Flash has achieved something I didn’t think it would — it managed to tear me away from my new iPhone 4S. Granted, I’ve had the 4S a bit longer than the Focus Flash, but I don’t think it was the “shiny and new” factor pulling me in; it was Mango and I heart it. As for the phone itself, it performed surprisingly well for its specs. Where other factors were downgraded from big brother the Focus S, Samsung left the processor alone, which certainly paid off. 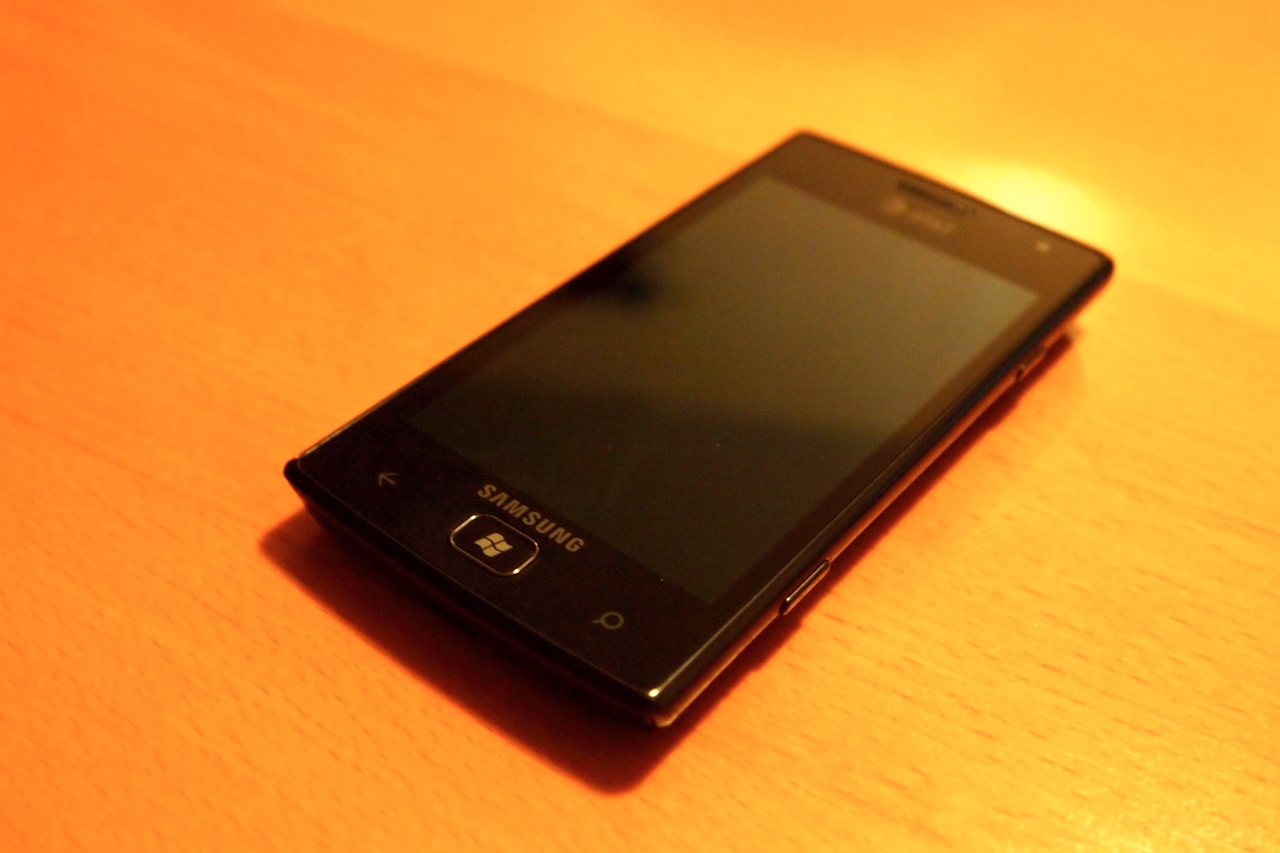 What surprised me most about the Focus Flash was its price tag. AT&T and Samsung are marketing this device at an entry-level price, but it sure doesn’t feel like a beginner’s phone. It’s quick, responsive, slim, and its specs are respectable. While smartphone noobs will definitely enjoy this little guy, vets could probably enjoy it equally and at a much lower price than they would with some of the mid-range Android phones out there.

I usually don’t dedicate an entire section of a review to the setup process, but with the Focus Flash I’m making an exception. Why? Because I actually enjoyed it.

Setting up a phone is probably the worst part of a review — filtering in contacts, setting up accounts, and moving over music is all a hassle. But Windows Phone changed that for me. Everything in Mango is organized a bit differently than we’re used to on iOS and Android. What should be “Contacts” is actually “People” and it incorporates all of your social networks and ties the information together for each individual person. So when I set up my Facebook account, my phone book instantly had information from all my Facebook friends. It was pleasant.

Granted, it took me a sec to get the hang of my “setup work flow,” since navigating through Windows Phone is a different beast entirely. But once I got going, there was no stopping me.

I’ve mentioned this briefly in a few other posts, but I’d like to take a hot second to just mention Microsoft’s obsession with “delight.” In more than one interview or product briefing, Microsoft has thrown the word “delight” around like it’s what they’re paid for. I’m coming to realize, it’s exactly what they’re paid for. To Microsoft, delight is equal to control plus beauty. Even during a process as tedious as setting up the phone, I still got warm and fuzzy seeing the screen transitions, typing in bits and pieces that Facebook and Twitter didn’t have access to, and seeing the finished product — a page full of live tiles blinking and pulsing with all my stuff. “Delightful” doesn’t even do it justice.

There’s no question that the Samsung Focus Flash is a good-looking little handset. It sports a brushed finish on the back panel, a flat face, and a contoured design around back to give it a more sophisticated look. On the right side you’ll find a dedicated camera button and a lock button, while the volume rocker’s over on the left. A 3.5mm headphone jack sits up top on the left-hand side, and a microUSB port is square on the bottom for charging.

Size-wise you won’t hear me complaining about the Focus Flash. The phones coming out these days with massive 4.5-inch screens are nice and all, but unless you’re a hardcore mobile video fan, the 3.7-inch display form factor is actually much more comfortable in the hand and the pocket. I do, however, have some beef with materials. The brushed back panel has a really hard time with prints, and it took me way too long to polish this little guy up for its photo shoot. 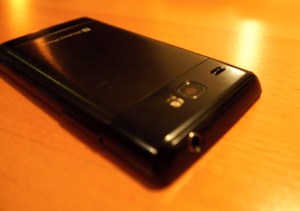 The weight of a phone is something I tend to harp on about, but it plays an important role in not only the way the phone feels in the hand but also the way you treat your phone. I find that when a phone is ultra-light, it’s perceived as somewhat “cheap.” Then again, if it’s too heavy it then becomes cumbersome. Balance is key. Even phones like the Droid RAZR (which will retail at a cool $299) feel a bit “too light,” as does the Focus S. The Focus Flash, on the other hand, feels just right — not heavy by any stretch of the imagination, but not so light it feels like it’s worth $50 — which again makes it seem much more pricey than it actually is.

All in all, the Focus Flash seems like a well-built little machine and it looks pretty slick, too.

I’m going to have to work really hard not to ramble on here because I’m currently blinded by my love for Mango and may have trouble shutting up about it. To put it concisely, Mango is awesome. The only issue I have with the platform, in fact, is a lack of apps. When testing a phone, I can’t help but measure it against my iPhone. So with each review, I try to see if I can do everything I would do on my iPhone with the tester. Getting the apps I wanted was where Mango, and thus the Focus Flash, failed most.

Everything else about Mango left me pleased. Unified messaging is simply glorious, and is actually something I now wish for on my iPhone. Whether your chatting it up on Facebook, over texts, or some other messaging platform, Mango pulls it all into one thread based on the person you’re talking to. If you want to switch over to another platform, simply tap the switch icon within the thread and choose the platform you’d like to message on.

I also really enjoyed Mango’s social networking integration on the whole. Mango pulls all of your accounts together in a unified “People” hub, where you can create specific groups for however you tend to categorize your relationships. Then there’s the “Me” tile, which lets you post and update your own social profiles, as well as check up on any notifications. Both the “Me” tile and the “People” tile offer up a “What’s New” page with a streaming flow of what’s happening on your Twitter, Facebook, Windows Live, etc. 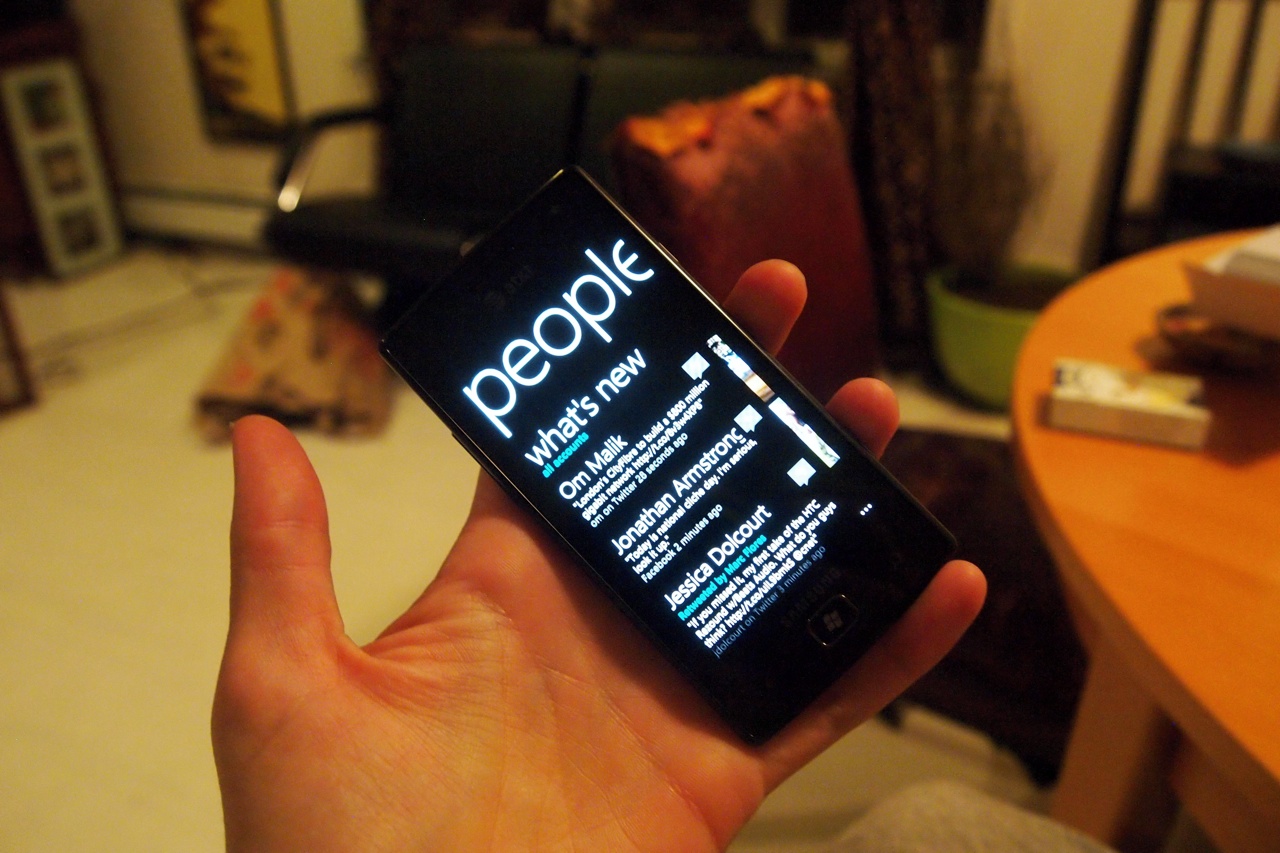 As far as the user interface goes, Mango leans toward convenience above all else. In almost any situation you can pull up a board of letters, whether its cutting down your options to names that start with “A” or apps that start with “J.” There are only two pages on the home screens, one filled with customizable live tiles, and the other a list of applications and settings menus. Upon first inspection I thought this was kind of stupid, since I’m simply accustomed to five or six home screens per phone. But with Mango a streamlined home screen set up is smart. When things are so well-organized and easily digestible, there’s no reason for a handful of home screens.

Yes, Mango is playing catch-up to other platforms in a lot of areas, but it’s also ahead in terms of differentiation. Android and iOS are very different beasts, but the idea behind them is very similar. Windows Phone is just… different — it’s a look and a layout we haven’t really seen that much and it’s actually really beautiful and intuitive. It is at this point that I start to beg developers to consider the platform. With apps, I have no doubt it’ll emerge as the third mobile ecosystem.

I honestly have no idea how Samsung pulled it off, but for $49.99 you can have one of the snappiest phones I’ve played with. Mango is slick on its own, but with the help of that 1.4GHz processor, the Samsung Focus Flash really steps up in the performance department.

Browsing the web with Mango’s Internet Explorer was pleasing to say the least, and I found it to load pages much faster than I had expected. In fact, I ran a couple tests between the Focus Flash and my iPhone 4S and was actually pretty bummed to see my beloved iPhone get beat every time. Built-in hardware acceleration within Mango means that IE9 is the mobile browser to beat. The Focus Flash was a great testament to that.

Battery life, however, was a pain and a half. The evening I got the phone, I played with it quite a bit. Probably around three full hours of browsing and setup, and maybe an hour of talk time/messaging. Then it died. After four hours. The next day I toggled on Mango’s Battery Saver and things got much better. The Focus Flash lasted a total of ten hours yesterday with some pretty intensive use, and it still has a little life in it yet.

The most major issue the Focus Flash and I had was making calls. The first time I tried testing out the phone I was in my apartment, which gets notoriously awful AT&T coverage. The Focus Flash placed the call, which is more than I can say for most other phones, but it sure wasn’t fun trying to decode what my friends’ were saying hearing just one of every five words.

I thought the problem would go away once I left the “dead zone,” but didn’t see much improvement. Conversations aren’t impossible by any means, and I actually had a few great chats using the little guy. But on the whole, call quality isn’t the Focus Flash’s forte. Then again, a lot depends on your location within AT&T’s network.

When all’s said and done, the Samsung Focus Flash proved me wrong. I was certainly excited for Windows Phone Mango, but wasn’t sure that $49.99 hardware could keep up. I was wrong. The Focus Flash is a delight. While the specs might not be able to compete on paper, you wouldn’t be able to tell during use. I recommend this phone for anyone who’s all about social networking, messaging, or simply wants a change from iOS and Android.