Marin Software, a startup that creates search engine management software for advertisers and agencies, has raised $16 million in Series E funding led by Crosslink Capital with DAG Ventures, with Focus Ventures, Benchmark Capital, and Triangle Peak Partners participating in the round. This brings Marin’s total funding to $51 million.

The company also announced that Eric Chin, partner at Crosslink Capital, will join the Board of Directors as an observer and that former Shutterfly VP of Finance John Kaelle has joined the executive team as Executive Vice President and Chief Financial Officer.

Marin Software offers a browser application to help advertisers and agencies managing paid search advertising campaigns across Google, Bing, Yahoo, and other search sites. In the past year, the company expanded its product offering beyond paid search and now offers applications for managing Facebook ads, as well as Marin Retargeting, a complete workflow, analysis, and optimization solution for advertisers and agencies. In addition, Marin also launched Marin Professional, which offers a simple version of the company’s platform for search marketers who spend less than $100,000 per month. 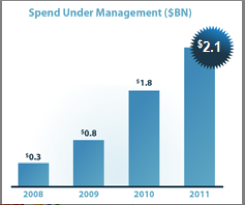 The company plans to invest the Series E funding to support the growth of its customer base which includes advertisers and agencies industries such as retail, education, financial services, insurance, travel, lead generation, automotive, B2B, and local. Marin currently serves 800 clients worldwide and manages 600 million keywords and more than $2 billion in annualized paid search spend for its customers.

And could the addition of a new CFO could mean that Marin may be eyeing an IPO in the future? John Kaelle joined the company from Shutterfly, where he was Vice President of Finance and Investor Relations. While at Shutterfly, Kaelle managed company growth from 150 to over 600 employees, revenue growth from $54 million to over $300 million, and an IPO in 2006.