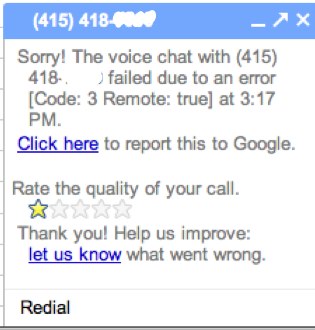 I think I liked Google Voice better back when it was hard to get an invitation. Back then it worked most of the time, and the infrequent outages were tolerable given how useful the service is overall. But over the last week the service has become spotty at best, and unusable at times. Given that I ported my phone number to Google I don’t have much choice but to soldier on in the short term – but Google needs to figure this out fast or they’ll lose me as a user.

What happened? In June Google Voice opened up for anyone to use, and there was clearly a surge of new people trying out the service. For the most part it weathered that storm. But last week Google launched Google Voice for Gmail, allowing users to make and receive calls right from the browser. It’s awesome. Truly useful. 1 million calls were made from Gmail in 24 hours.

Uh oh. That’s when the trouble started. About 30% of my inbound calls have the caller muted – they can hear me but I can’t hear them. And outbound calls are worse. In the last 24 hours at least 75% of them failed completely. Either it never starts ringing, or it rings a couple of times and then dies. In fact, I called Google PR to give them a heads up on this story and that call failed too. As did a second attempt.

From what I’m hearing this isn’t a short term surge issue, either. There are issues with Google’s core infrastructure conflicting with the type of system Google Voice needs to operate effectively, multiple sources have told me. And Google to date hasn’t made the investment needed to build a proper back end to the service that scales. That doesn’t really work for me as a user. If you wanna be a phone company, you can’t go dead.

Update: Right now, there are no known widespread issues or outages with Google Voice. We are looking into reports of people experiencing some trouble with the service, but these are isolated problems and not related to the increase in usage we’ve seen recently.