No one should have to suffer the sound that comes out of TVs these days, especially when you can get a soundbar for under a bill that will be wildly better. Get into the $150-$200 range and you can get a sub as well and some extra features like smart assistant, Airplay and so on. But Sonos knows that its customers are willing to pay considerably more for its slick integration and advanced features.

At $279, the Ray is priced well above other essentially 2.0-channel systems except for the likes of Bose, another brand that generally gets a pass for inflated price tags. But the truth is it’s not really competing against standalone soundbars — it’s competing against other Sonos options.

If a buyer is considering a Sonos setup, and the Ray in particular, they’re not looking at Anker and Sony soundbars — they’re thinking about joining this exclusive smart speaker club and wondering what the best way is to go about it without spending a fortune.

The Ray is certainly a cheap and practical way to make that happen, and if you are watching dialogue-heavy content in a smaller room, it’s going to be solid. But if you’re looking for a sound that is in any way big, you might as well open your wallet now and upgrade to the Beam. 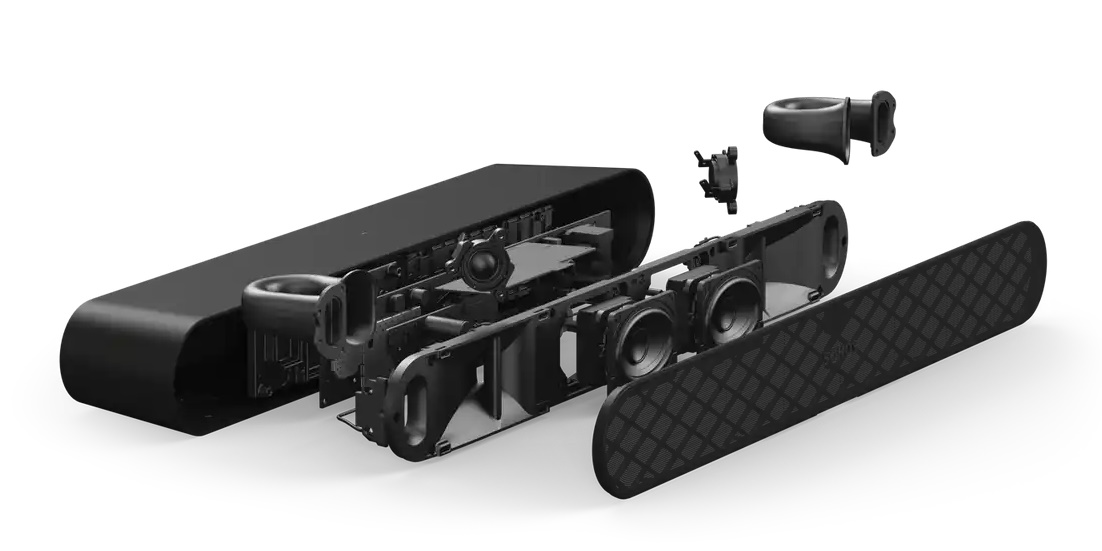 You can see it tries to spread its sound out, but ultimately the soundstage isn’t large. Image Credits: Sonos

Setting up the Ray was very easy for me: It’s got an optical connection and my remote (I have a fairly recent Vizio TV) worked with its little training system to get the volume and mute buttons online in a minute or two. Not everyone has been so lucky, but that’s the trouble with “smart” speakers; they’re not always smart in the right ways. If you’re looking for HDMI, Bluetooth or 3.5 mm (let alone RCA or some such) you’ll have to move on, it’s optical or Wi-Fi only here.

My reference system is an older Yamaha (also optical) with a great warm sound and compelling virtual surround but, frankly, awful dialogue clarity even with the speech enhancement thing on. The Ray is the exact opposite of that: A bright, voice-forward sound with great clarity in a limited soundstage.

Sound and music from the Ray always seem to be coming from right in front of you, very clearly and with some stereo effect, but none of the remarkable room-filling ambience that I was able to achieve with the Yamaha less than half its price. On the other hand, I didn’t have to keep the remote in my hand to turn it up whenever someone talked and down again whenever a battle starts. (Gandalf is the king of speaking too softly and carrying a big stick.)

But as I said, the Ray’s real competition is the Beam, its big sibling and at $449, considerably more expensive. I didn’t consider a handful of Ones as being an alternative, though they’d probably sound good, because though it would be the same price for two, it’s really a different use case — this is about consumers who want to improve their TV and are Sonos-curious, not those who are ready to spend on a full-home music system.

The bar is definitely compact and cute. But the Beam is only two inches or so wider. And what’s with the turtle? Image Credits: Sonos

I alternated between the Ray and Beam on the same content and the Beam, unsurprisingly, was better in every respect (except one — dialogue syncing, since I believe I have a delay in the eARC channel, but I can’t pin that on Sonos). Dialogue sounded just as good, but richer, while ambient sounds and music spread out much more and with a better low end. The Beam also worked better with music, seeming to emanate it into the room generally rather than direct it toward you.

I have a hard time believing that if someone wants to pay a premium to begin with, and they’re thinking hard about buying into a Sonos system, that they would for any reason but a complete lack of money choose the Ray. It’s unfortunate, but despite sounding pretty good, the Ray falls into a trough between cheaper and better (but not as smart) soundbars and the more expensive and much better (and not much larger) Beam.

It’s not that the Ray is bad at all — it’s compact, attractive, easy to set up and sounds good. But it’s in an awkward position: It doesn’t sound good enough to warrant the premium over “normal” soundbars half the price, and if you consider a system like this an investment, it’s absolutely worth stepping up to the Beam.

Where is the Ray a good option? I would say if you’re already in the Sonos ecosystem and perhaps already have some One speakers in the TV room, the Ray essentially fills the role of an excellent center channel; its shortcomings more than made up for by the surround setup. (Sonos offers this as a package deal — $677.)