Facebook News, the social network’s dedicated news section launched to U.S. audiences in June, is soon expanding to international markets. The company announced today it plans to accelerate its plans to bring the product to non-U.S. markets, including the U.K., Germany, France, India and Brazil, within the time frame of six months to a year.

As in the U.S., Facebook says it’s committed to paying news publishers in the new markets for the content made available in the Facebook News product. However, it notes that the experience may not be exactly the same as it is in the U.S., in other ways.

“Consumer habits and news inventory vary by country, so we’ll work closely with news partners in each country to tailor the experience and test ways to deliver a valuable experience for people while also honoring publishers’ business models,” explained Campbell Brown, Facebook VP of Global News Partnerships, in an announcement detailing Facebook’s plans.

As the product expands in these international markets and beyond, the company will face various new laws and regulations that require tech firms like Facebook to pay for news. In Australia, which was not listed as one of the new destinations, Facebook and Google will both have to pay for news content under a recently launched system. Similar laws are being enacted in the EU, as well. France, for example, was the first of the European Union Member States to push Google to pay for reuse of news snippets in Search and Google News, as part of a law that requires tech companies to pay publishers.

Facebook News’ planned launch in that country seems to indicate the company has managed to successfully negotiate with regulators. 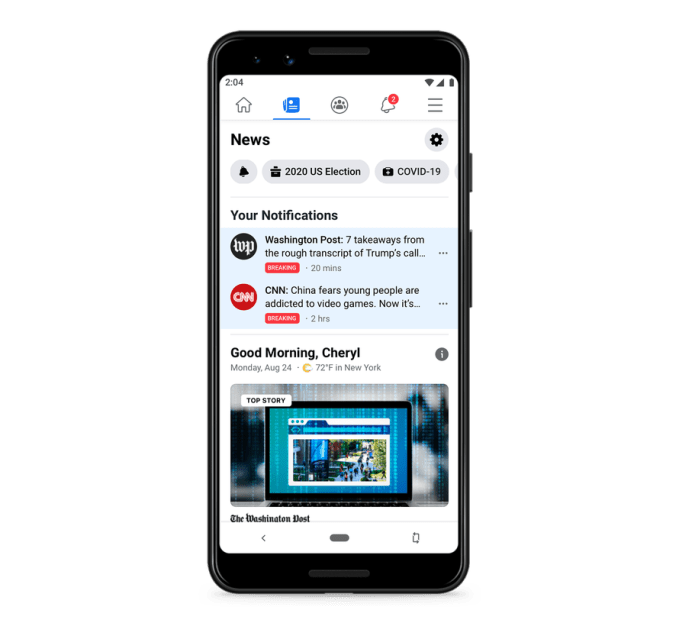 The Facebook News product itself is still too new to pass judgement on at this time, as it’s only been available for a couple of months to all in the U.S. But Facebook, it should be noted, has had a rocky history with news distribution on its platform before its launch of Facebook News.

Years ago, Facebook had offered a short list of trending stories across the network. But when it fired the editors who curated that section, Facebook’s algorithms began posting fake news to the list. Facebook finally removed the feature in June 2018.

The company also tried to serve publishers over the years, with mixed results. It once pitched the concept of “Instant Articles” that loaded quickly in Facebook, but restricted advertising, subscriptions and the recirculation modules publishers relied on, leading many to abandon the feature. And it once pushed the “shift to video,” but had inflated its video metrics. When Facebook pulled back on paying publishers, some news businesses were wiped out. Also in 2018, Facebook announced it would deprioritize the distribution of news posts in its News Feed in favor of personal updates from friends and family, shrinking referrals to news outlets.

In more recent years, Facebook’s role in the spread of fake news, propaganda, disinformation and other un-fact-checked content has been brought to light. Unfortunately, any changes Facebook makes at this point may be too late to address the underlying issues. For example, by the time Facebook decided to ban some QAnon groups and accounts earlier this month, the conspiracy movement had become a part of the mainstream consciousness. Last May, the FBI had even flagged that conspiracy theory-driven extremists, including those who believe in QAnon, were now a domestic terrorism threat.

The news section, programmed by journalists, today requires that publishers qualify for inclusion by having a significantly large audience and abiding by integrity standards. Facebook claims to look for negative signals, like if the content gets flagged by fact-checkers or if it includes clickbait, engagement bait or use of scraped content. But elsewhere on the social network, Facebook takes a different approach to misinformation. It had been at the same time relaxing its rules around misinformation for several high-profile conservative pages, leading to questions about its overall news judgement.

At launch, Facebook News had over 200 general news publishers and thousands of local and regional publications in the U.S.

Facebook also claims that over 95% of the traffic Facebook News delivers to publishers is incremental to the traffic they already get from News Feed.