Besides binge-watching TikTok videos and battling enemies in the magical land of mobile games, many Chinese people may also pass time during the upcoming Lunar New Year on Xuexi Qiangguo, a news and chat app developed by the country’s top ideology officials.

The app managed to top the Chinese App Store between January 22 and 25 before two ByteDance apps pushed it down to the third place this week, download statistics from App Annie shows. At a glance, the news section is almost exclusively about the Communist Party and president Xi Jinping. 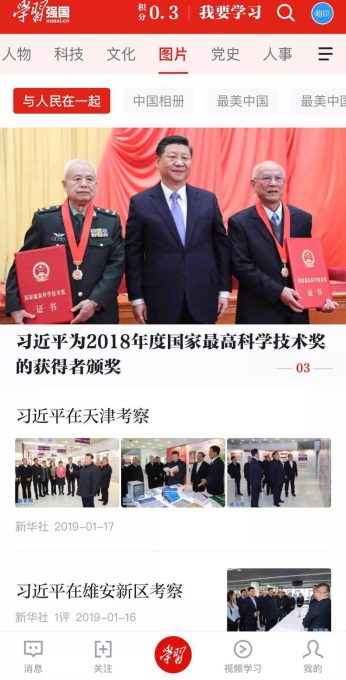 The app is almost exclusively about the Communist Party and president Xi Jinping.

It doubles as an instant messenger, with development support provided by Alibaba’s Dingtalk enterprise communications tool. That means users can log in via their Dingtalk account and chat with their Dingtalk contacts directly over Xuexi Qiangguo. 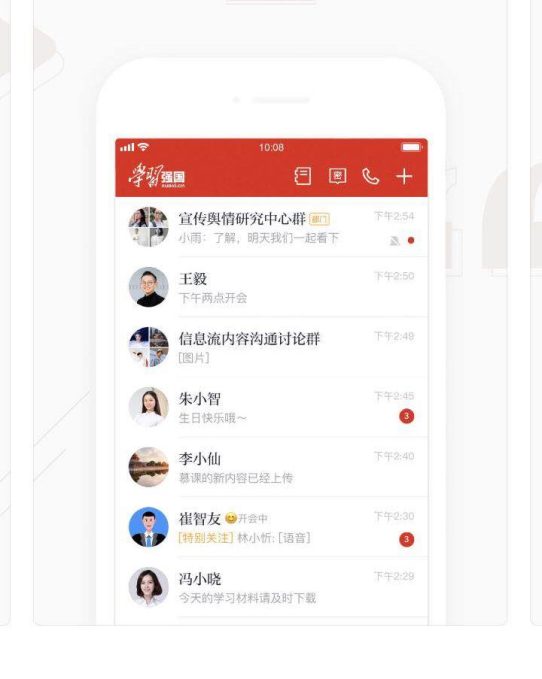 Directly translated as “studying strengthens the nation,” Xuexi Qiangguo is the product of a research center under China’s Publicity Department, an important organ in charge of how information disseminates in the country. The digital weapon underscores the Communist Party’s growing efforts in recent years to appeal to phone-savvy generations, though the app seems to have peaked.

As of February 1, the iOS version of Xuexi Qiangguo is rated 2.4 out of 5 from 6,810 reviews. Its impressive download number, as it turns out, is in part a result of a top-down order. Many early users are Party members or work in China’s giant state apparatus, who were told to install the app. Several users TechCrunch spoke to, including a public school principal, a director of a district party committee and a municipal government official, confirmed that everyone in their organizations must download the app and every now and then, users may get quizzed on relevant content.

Newspapers and social media posts also suggest local governments have mandated downloads among Party members and encouraged the general public to give it a try. Some take a step further to organize offline study sessions for the app. For some context, China had nearly 90 million Communist Party members by the end of 2017. 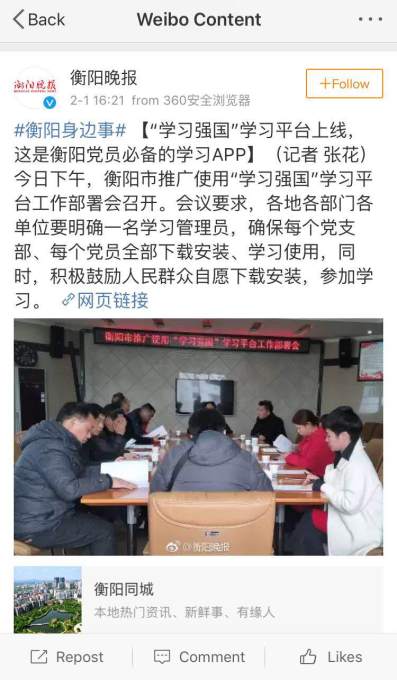 A city in Hunan Province has ordered all Party members to install Xuexi Qiangguo, a local newspaper reported. The photo shows a study session held for the app. Source: 衡阳晚报 via Weibo

“I believe that most of the downloads were incentivized, probably only a very small portion was initiated by a real interest,” says Kristin Shi-Kupfer, director of the research area on public policy and society at MERICS, a German think tank specializing in China. “This app will probably drop out of the rankings of any app store soon.”

To engage the younger crowd, the app takes cues from new media forms in China’s flourishing online world. The news section, for instance, appears to be modeled on ByteDance’s popular news app Jinri Toutiao. While Toutiao uses algorithms to understand user preferences and delivers content from a wide array of third-party publications, Xuexi Qiangguo curates from an army of 18 state-controlled outlets.

The app also has a gamified loyalty program, which rewards users virtual points when they complete a task, such as daily sign-in. Because registrations are on a real-name basis, supervisors can check who in their organizations haven’t installed the app, ushering in a new kind of digital monitoring.

“The timing of the publishing of this app might be linked to the upcoming Chinese New Year Festival, which the Chinese Communist Party sees as an opportunity and a necessity to spread their ideology,” notes Shi-Kupfer.” [It] may be hoping that people would use the holiday season to take a closer look, but probably also knowing that most people would rather choose other sources to relax, consume and travel.”

The third paragraph was updated.