Chat fiction startups have been exploring the types of stories you can tell in the form of text message conversations, and now Hooked is taking that exploration one step further with the launch of “Dark Matter.” The company describes this as its first feature-length story.

“Dark Matter” tells the story of Tasneem (Taz) Singh, a South Asian American student at Stanford who, after the mysterious death of her twin sister, discovers that she has the ability to interact with the paranormal.

The story debuts today on Snapchat, with a new chapter coming out every day until Tuesday, October 30. According to CEO Prerna Gupta, the full script totals 32,000 words — the length of a feature film script or short novel: “I think it’s fair to say this is the longest chat fiction story. It’s certainly the longest one we’ve ever produced for Hooked.”

If you’re not already a chat fiction fan, you may be skeptical about reading something that long in text message format. Gupta admitted that she and her husband Parag Chordia had similar doubts when they started the company together.

“I would be lying if I didn’t say if we also didn’t have that question ourselves,” she told me. “When a new kind of format or really new medium comes up, you start with the basics first. You tell the simplest stories, then as you become more adept at communicating with that format, you can start to go deeper.”

That’s meant going beyond text — “Dark Matter,” for example, will include a voice track and custom illustrations. 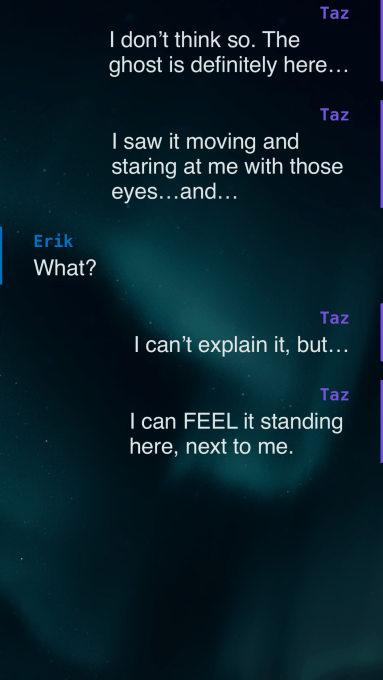 “The length makes a big difference,” Gupta added. “You can take your time, slow it down and spend more time with world building, developing deeper relationships between the characters.”

“Dark Matter” was written by Hooked staff writer Elyse Endick, but Gupta said the writing process was “almost more like a writers’ room — it was very collaborative, she did a show bible, then at each step she and I and our head of content would sit in a Google Hangout and just kind of flesh it out.”

Although the story is premiering on Snapchat, it will also make its way to the main Hooked app. Gupta said that she’s less focused on owning the distribution channel than on reaching big, global audiences — and distributing via Snapchat can help with that. (The company says 100 million unique readers have accessed its stories across the Hooked app and Snapchat.)

“I’m not trying to be the next Instagram,” she said. “It’s not about the app or any given app. For me, it’s really about our stories.”

And while Snapchat has recently lost some of its luster (daily active user count fell by another 1 percent in its most recent quarter), Gupta said, “I think people are underestimating their whole strategy around entertainment, around being TV for the next generation.”

She added that engagement around Hooked content on Snapchat has been “insane.”

“Why are we investing our resources with Snap? Because of what we’re seeing,” she said. “Our audience and how engaged they are, that’s real.”